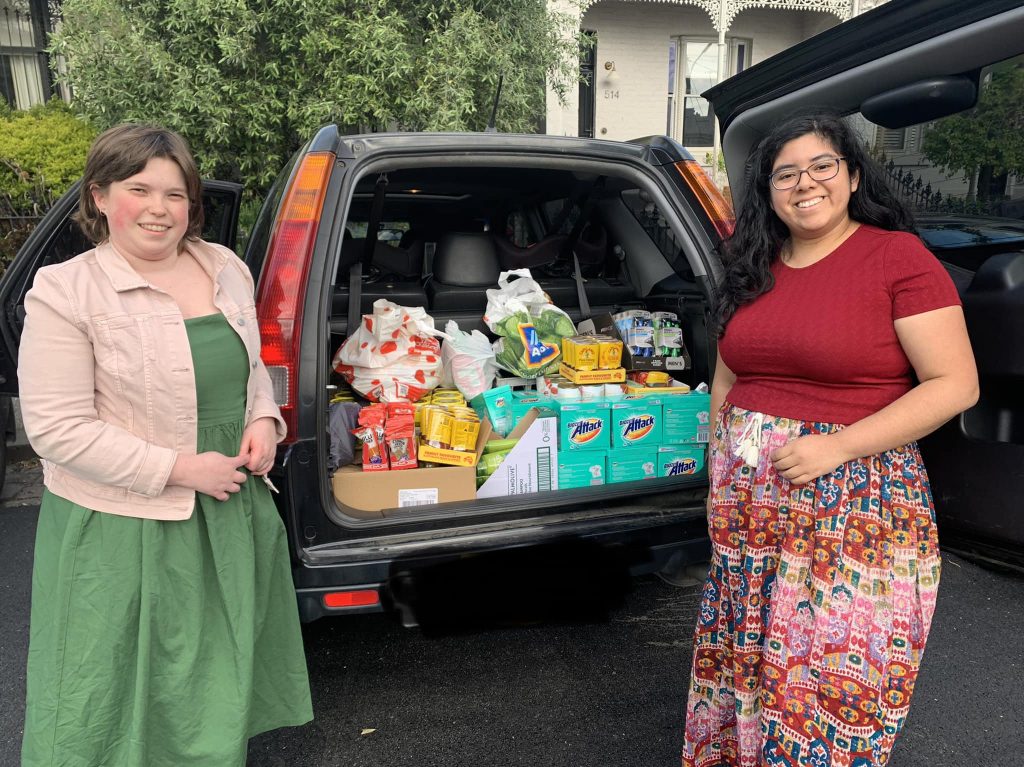 While many young people are preoccupied with social media spending a lot of their time worrying about how they look in their latest Instagram post, a group of young people in Adelaide and Melbourne are bucking the trend and instead focussing on how through Mercy they can make the world a better place.

The young people are members of Young Mercy Links (YML) and range in age from 18 – 30 years and are motivated by the Mercy values of compassion, justice, hospitality, and hope.

The two Young Mercy Link Coordinators, Gaby Kinsman in South Australia and Angela Scarafilo in Victoria, say that many people come to YML seeking to remain connected with Mercy and to be with likeminded others who are seeking to make a positive difference.

“YML is a platform for young people to have a real sense of belonging to a group where they can turn their ideas into action and connect with others who share their passions for Mercy and justice.

“Many of our members come out of Mercy schools where they were introduced and touched by the Mercy story and the works of the Sisters. They become part of YML because they see it as an important avenue to continue their passion for Mercy in their post-school life,” said Gaby.

Angela said that while the majority were Mercy educated, membership of Young Mercy Links is open to anyone who may feel drawn to Mercy for the first time.

“One of our members found us through a google search, after having arrived in Australia from Paraguay South America , seeking a connection with likeminded people.

“For others they have got involved after seeing how their friends were enjoying YML”, said Angela.

Looking at the projects and activities that have been organized by the two YML groups, 2022 has certainly been a busy one. 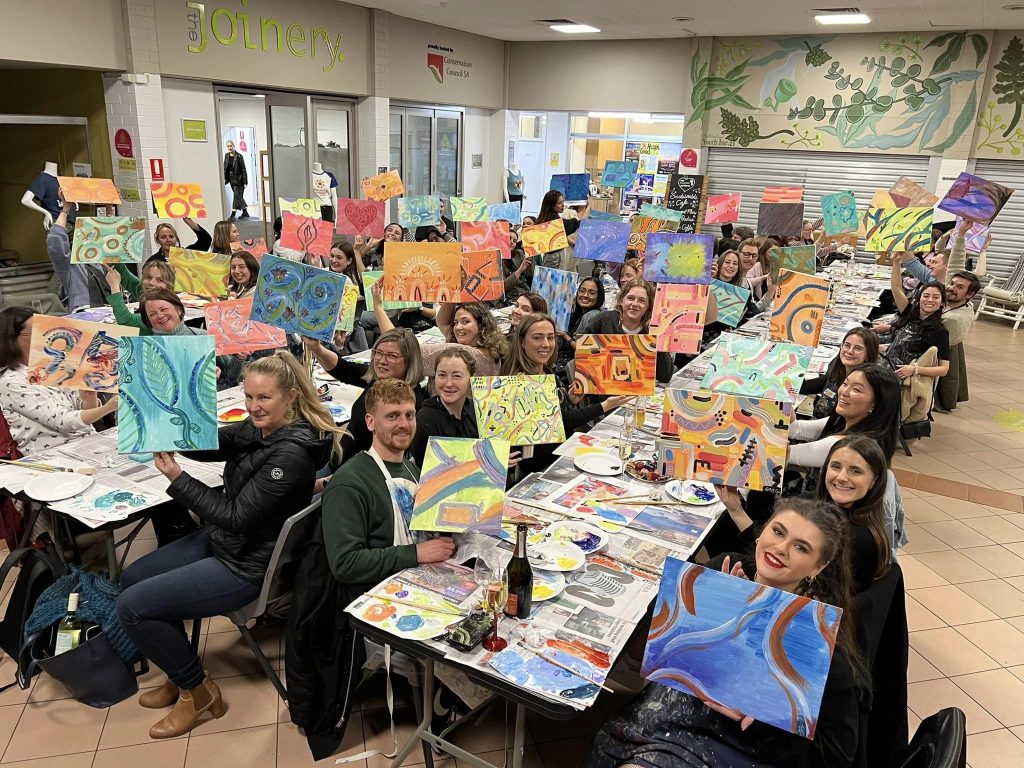 Paint and Sip Fundraiser organised by Young Mercy Links South Australia in support of the Circle of Friends.

In the past 12 months, YML Victoria has organised an art exhibition at Melbourne’s Mercy Hub showcasing the art of detained asylum seeker Naser Moradi, a launch for a book featuring the personal stories of those impacted by Australia’s restrictive immigration policies called ‘The Shape of Hope’, immigration detention centre visits,  a food drive, trivia night, pampering visits to a women’s shelter and a clothing swap for National Recycling Week to promote slow fashion.

In South Australia the activities have included Aboriginal Cultural Safety and Respect training with Bookabee Australia, a waste management training led by member Taryn Hansen who works for Plastic Free SA, participation in the Justice for Refugees SA’s election campaign speaking to members of parliament, fundraisers for Circle of Friends in support of refugees and asylum seekers, attending the Palm Sunday rally for refugees and a mother’s day picnic.

Angela and Gaby agree that one of the many things that attract young people to YML is the fact that it is member-led. The members set the priorities for the group, the activities to be conducted and coordinate all the event management.

“This means that each year may look different to the previous one and the one after.

“Both groups usually have a planning day at the beginning of each year and none of us come to those with any real preconceived notion about what the activities will be. The agenda is driven by members and what they are passionate about,” said Angela.

Gaby said that building the leadership skills of the members is a key feature of YML.

“With any of the activities we undertake it must always come from an informed place and the result of purposeful reflection.

“As much as we look ‘outside’ in terms of how we can respond to the many issues where Mercy is needed now, YML also takes time to ensure we are a place of support to reflect on our own lives and who we are becoming as people, which we do in a precious  and sacred way,” Gaby said. 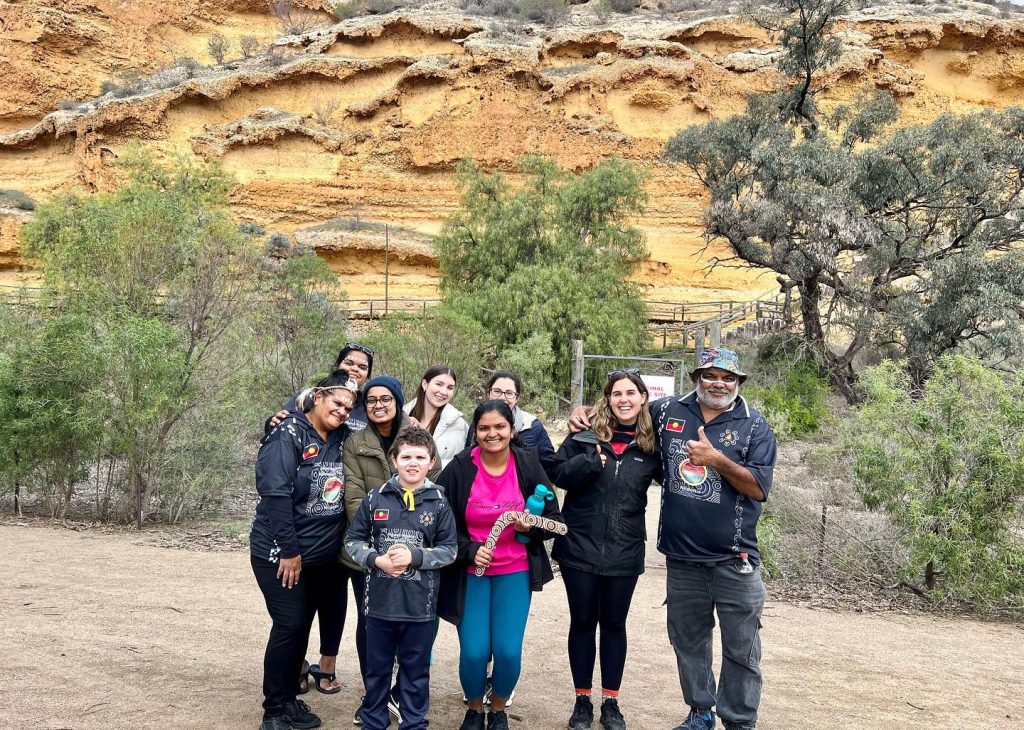 The ongoing success of YML is due in no small part to the dedication of the two Sister Mentors – Margaret Moore RSM in Victoria and Meredith Evans RSM in South Australia. Both sisters were instrumental in establishing YML in their respective states in the early 2000s and have been involved ever since.

“I see the role of mentor as accompanying young people, particularly women, to realise their own potential in responding to a world crying out for mercy, justice and love,” said Sr Meredith.

“YML is one response to the question of how we can foster the next generation to live out the Mercy charism to ensure that it goes into the future.

“It is about a new generation of young people inspired to grow in Mercy values and their continuing the legacy of Catherine McAuley and the sisters that followed her,” Sr Meredith said. 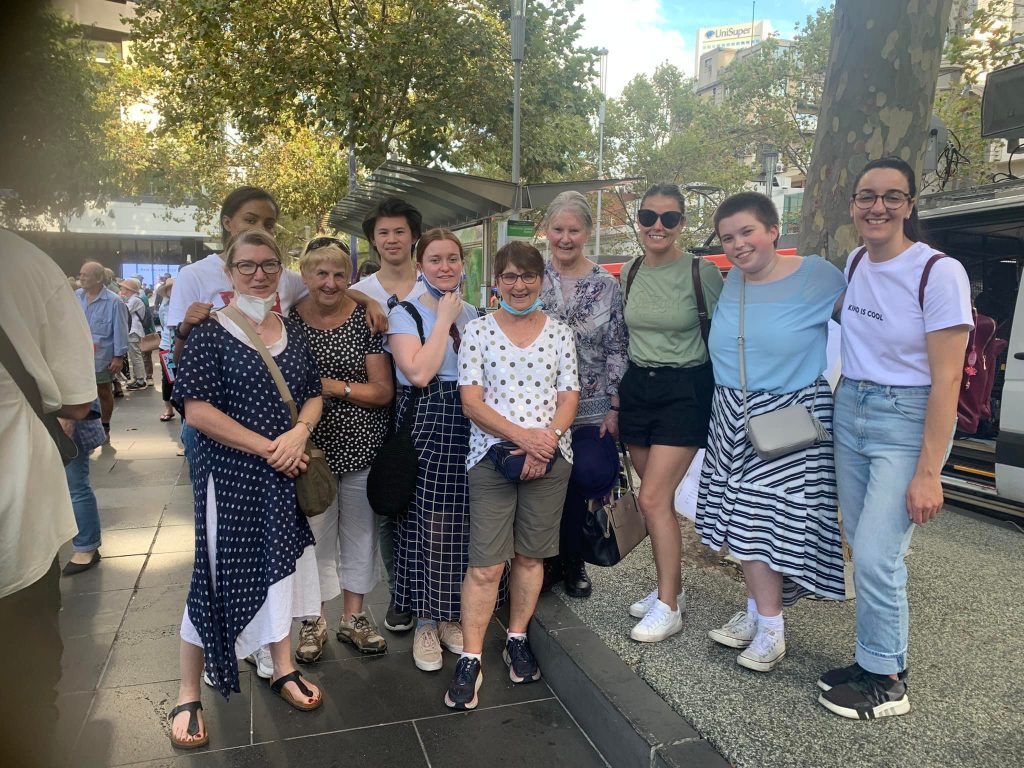 Sr Margaret Moore (second from the left) with Sisters and Young Mercy Links Victoria members at the 2022 Palm Sunday Refugee Rally (Angela Scarafilo is third from the right).

Sr Margaret said that she sees the role as one of encouraging and supporting the coordinators and through them the group members.

“It is about holding a space and being there to provide a connection to the wider Institute and to point them in the direction of resources they may be needing to enable the group’s vision to become a reality,” she said.

“I constantly am amazed at the terrific activities and projects the YML members do.

“It is an interesting time in these young people’s lives. They are vulnerable in that they may be going through a lot of change including university, starting a new job or moving out of home. On the other hand the world is their oyster and there is the wonderful energy which comes with that,” said Sr Margaret.

Both Gaby and Angela are very grateful to their Sister mentors and the supportive role they play in nurturing the groups.

“I can definitely say that none of what YML SA has achieved would have happened without the mentorship, guidance and wisdom of Sr Meredith who really has such a passion for working alongside young people and helping us to know what’s within ourselves,” said Gaby.

Angela concurs and says that the support provided by Sr Margaret has been invaluable.

“It was Marg’s original vision that saw the first YML group come to life and through her guidance and input we have seen it flourish and grow into a movement. She has been instrumental in harnessing the energy of the young people in our community to be another face of Mercy moving into the future.”

“The Mercy Hub has also meant that we have had a home base and been able to be part of a wider team of people seeking to bring Mercy and justice to our world”. 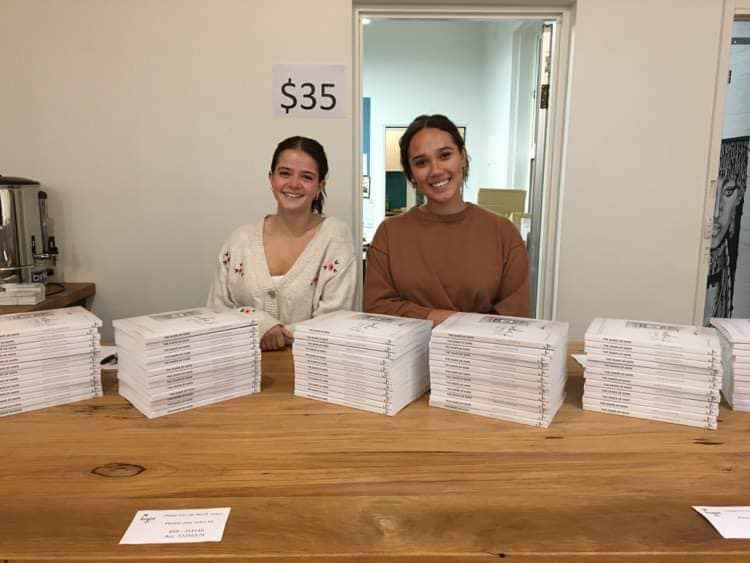 Young Mercy Link Victoria members at the Mercy Hub at the book launch for Shape of Hope’.

Both Angela and Gaby see the ongoing connection with the local sisters as also important.

“We value the opportunity we have been given to walk alongside the sisters and learn from them.

“The Mercies have always been the walking nuns and young people are increasingly attracted to the Mercy charism because at it’s heart it is about action”, said Angela.

Gaby said that it is about embedding values in young people that the Sisters want to continue to grow.

“Yet just like Catherine McAuley allowed individual communities to find their way rather than imposing centralised leadership, the Sisters have also given us space to explore where Mercy is taking us”, said Gaby.

Next year the two YML groups hope for the first time to offer a joint retreat bringing together the South Australia and Victorian members. There are also plans for a joint immersion in Cambodia, building on the success of successful trips by YML SA members in previous years.

Maintaining strong connections with the Mercy world and Mercy Global Action continue to be priorities for both groups, with most of the issues confronting the planet requiring a merciful response not just locally but globally. 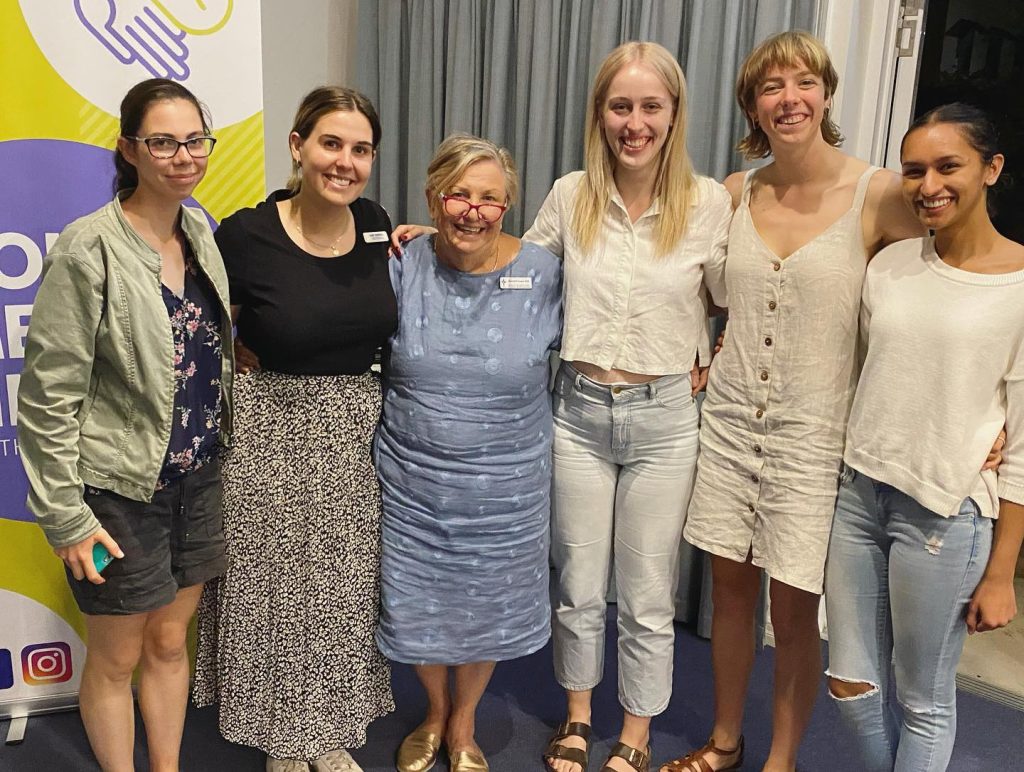 “I get so inspired when I see Catherine, Gaby and our YML members resonate so strongly with wanting to be part of the solution to the big questions facing our world”, Sr Meredith said.

Sr Margaret from Victoria said that while she was also proud of the connections YML has made, both with the Mercy Hub in Melbourne and the wider Mercy world, it is the some of the local responses that have stuck with her the most.

“The work that Angela and the YML members have done in providing support to people in immigration detention has particularly impressed me.

“In all their advocacy and support they have always sought to compassionately honour and get to know the person and people with whom they are advocating.

“They very much respect the fact that these are not just people’s stories but people’s lives,” Sr Margaret said.

Sr Meredith, who spends a lot of her time supporting refugees and asylum seekers with a group called ‘Circle of Friends’ said she, like Margaret, was also inspired by the work YML are doing locally.

“The work we do at Circle of Friends would not be possible without the involvement of YML.

In future years there is hope that YML may extend into other parts of Australia, building on the already important place it has within the Mercy tradition.

“Beyond the impact the young people make while members of YML, I know that many continue to bring about merciful responses in their careers. In time, I am sure some of them will play important roles within some of our Mercy ministries such as Mercy health, education and community services”, said Sr Margaret.

Sr Meredith agrees and says that the formation young women are receiving in YML will embed in many a life-long commitment to Mercy and Justice.

“I am still bearing the fruits of my involvement in Young Christian Workers Movement in my youth, and I am sure the process of looking, discerning and acting that is also at the heart of YML will be carried forth by these incredible young women into the future”, Sr Meredith said.

Its only appropriate that the Young Mercy Link Members have the final word, here is what four of them had to say –

“Young Mercy Links brings a community of like-minded individuals together in the spirit of hope and drive.
Our culture radiates a willingness to provide hospitality and compassion in the ethos of achieving justice” – Maya

“Young Mercy Links SA is a warm and open space for young people to engage in conversations about the injustices that weigh on their minds. I love that our focus areas are fluid and shift to reflect the passions of our members.” – Issy

“I have really loved being a part of YML because I enjoy collaborating with like minded people and educating others about topics I’m passionate about.” – Jess

“Young Mercy Links has helped me work on my leadership skills as well as giving me a sense of pride and achievement,
knowing I’m supporting other people like me and helping my community!” – Phoebe