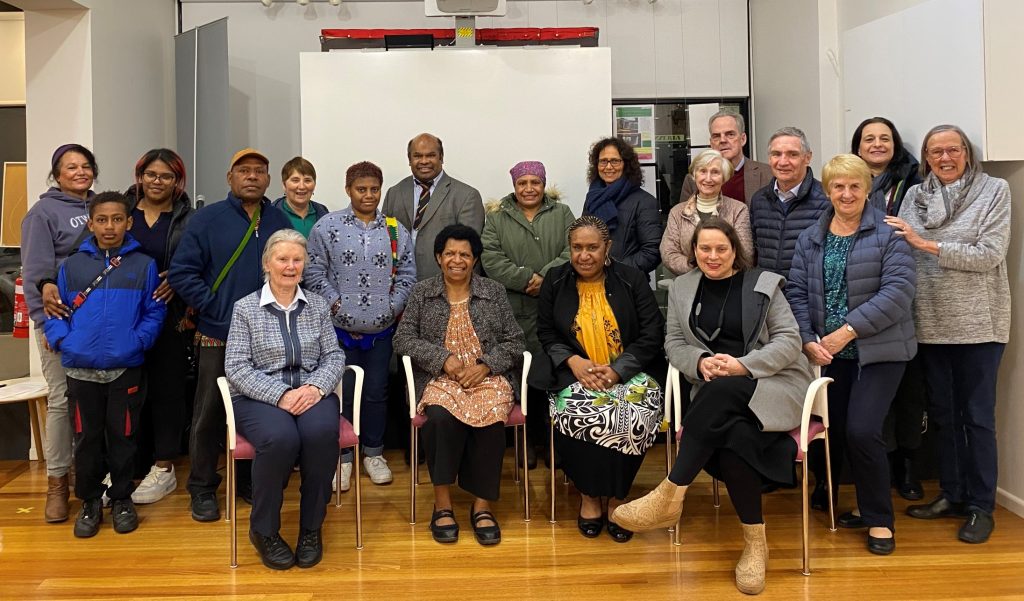 A happy gathering of participants at the conclusion of the talk given by Hilda Wayne, ABC Radio National broadcaster and producer. Hilda’s program, “Sistas, Let’s Talk” is podcast recorded for the women of the Pacific community on a wide range of topics of interest to them. Back row L to R: Bibra, Inume,.Joa, Kinten, Rosemary, Paul, Rebecca, Alba, Margaret, Peter, John, Margaret, Claudia and Mary. Front Row (seated) Margaret, Elizabeth, Hilda and Enza. (Photographers– Linda and Katherine)

ABC Journalist Hilda Wayne has explored the important relationship between Australia and Papua New Guinea at a recent talk held on August 12 at the Mercy Hub organised by Cookhouses n Tanks a Lot.

Hilda Wayne, ABC broadcaster and producer, works at the ABC studios in Southbank and presents regular podcasts to the women of the Pacific community on a very wide range of topics of interest.

Hilda gave us a gracious and well-informed presentation on the development history of Papua New Guinea since Independence before opening for a lively discussion on her theme. She was joined by Dr Elizabeth Kopel from the PNG National Research Institute, who was visiting Australia briefly and also by Fr Paul Sireh, a Carmelite priest, native of Manus Island.

Hilda’s own story illustrates the development of women leaders in Papua New Guinea since Independence in 1975. Born in a village in the Mt Hagen region, Hilda learnt English as a child by listening to ABC National broadcasts on her grandfather’s short-wave radio.

As a particularly able student, she progressed through primary and secondary education, and studied journalism at University.

Now she is here at the ABC in Melbourne, providing the same broadcasts to a younger generation of Pacific women. It is a remarkable story and her hope is that more women will take up community leadership positions, particularly in the political arena. In the most recent elections, Hilda said, only two women out of 167 candidate were elected.

Hilda spoke of the historical influence of Australians in Papua New Guinea, from the highlands gold rush of the 1930s, through wartime and colonial government to Independence and expressed appreciation of the friendship of Australians that she has experienced first-hand, noting that we are only a few hours by air separated from each other in modern times.

Elizabeth spoke briefly on her role in researching the informal economy of her nation, of which women are the greater participants as they sell their garden produce and handcrafts at the local markets. She was very affirmative of our project and suggested that the churches have a valuable role in encouraging the village women and finding ways to value-add their income by teaching new skills.

Cookhouses n Tanks a lot is a ministry of Catherine McAuley Services Limited.