Sister Janet back in the spotlight 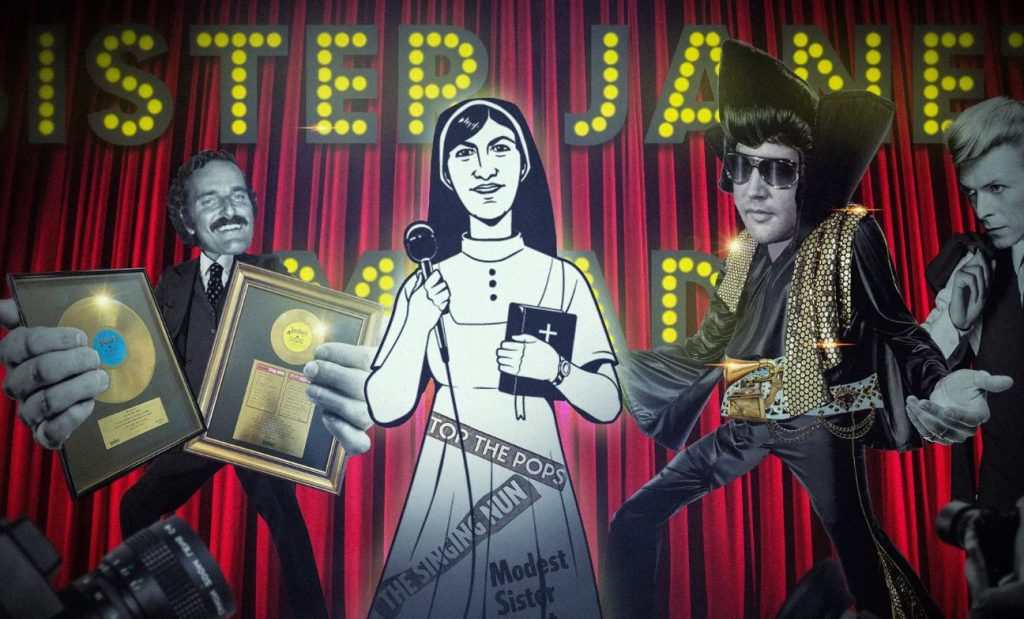 Sister Janet Mead, who died in January this year, was recently back in the spotlight with an animated film being run as part of the Adelaide Film Festival and celebrations of the fiftieth anniversary of her much loved ‘Rock Mass’. Mary-Anne Duigan RSM has written below about these two wonderful events.

The last couple of weeks in October have seen our dear Janet, who died on 26th January this year, back in the public eye.

The Adelaide Film Festival, which ran from 19th to 30th October, featured an animated 5 minute film, projected on to the walls of the alleyway leading to the Palace Nova Cinemas in the East End of Adelaide, called “Nun Hit Wonder”. It is part of a series called ‘Tales in Light’, which is being created to shine a light on the stories of Adelaide’s forgotten people and events. Janet’s story is the first to be told. It tells of her “extraordinary rise from a Mercy Sister to Grammy nominee with her pop rock million-seller ‘The Lord’s Prayer. She lost the Grammy to the King himself.”

The promo goes on to say: “Never wavering from her spiritual roots, Sister Janet returned to her role as a Catholic music teacher of young women and went on to found her renowned homeless mission while advocating for Australia’s and the world’s dispossessed. Our directors Anthony Firth and Jasper St Aubyn West have embraced the 1970s spirit of change that also buoyed Sister Janet Mead’s trajectory with a playful animation capturing the colourful 1970s.” “Writer Peter Monaghan . . . produced the compelling outline on Sister Janet Mead.”

Through sound, (including some of her songs – and not just the Our Father), animation (which has the Catholic Cathedral literally ‘rocking’) photographs, and swirling, colourful movement, the film tells Janet’s story from her childhood through to old age. It briefly highlights her celebrity – especially her Grammy nomination when her rendition of the Our Father was pipped at the post by Elvis Presley (for his version of “How Great Thou Art”,) but mostly focusses on her work for the poor and her passion for justice.

It was a delight to watch: an explosion of colour, music, fun and energy It was shown on a continuous loop with 5 minutes between each showing from 8.00pm until midnight every night of the Film Festival. What a great tribute to one of our own Sisters! 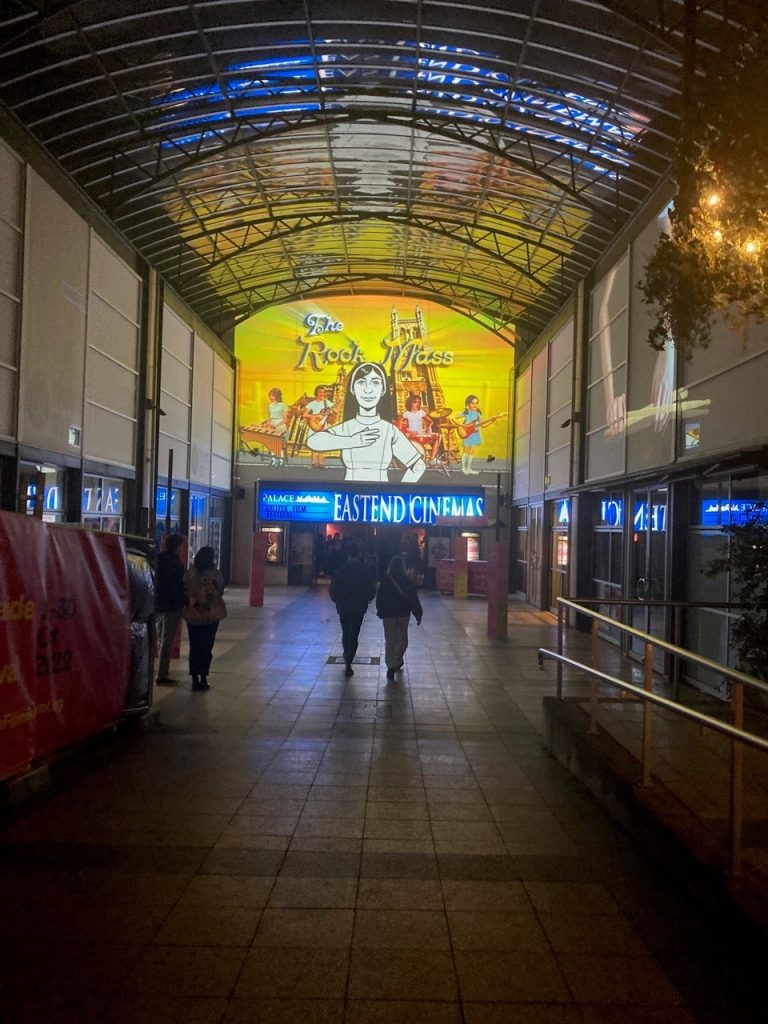 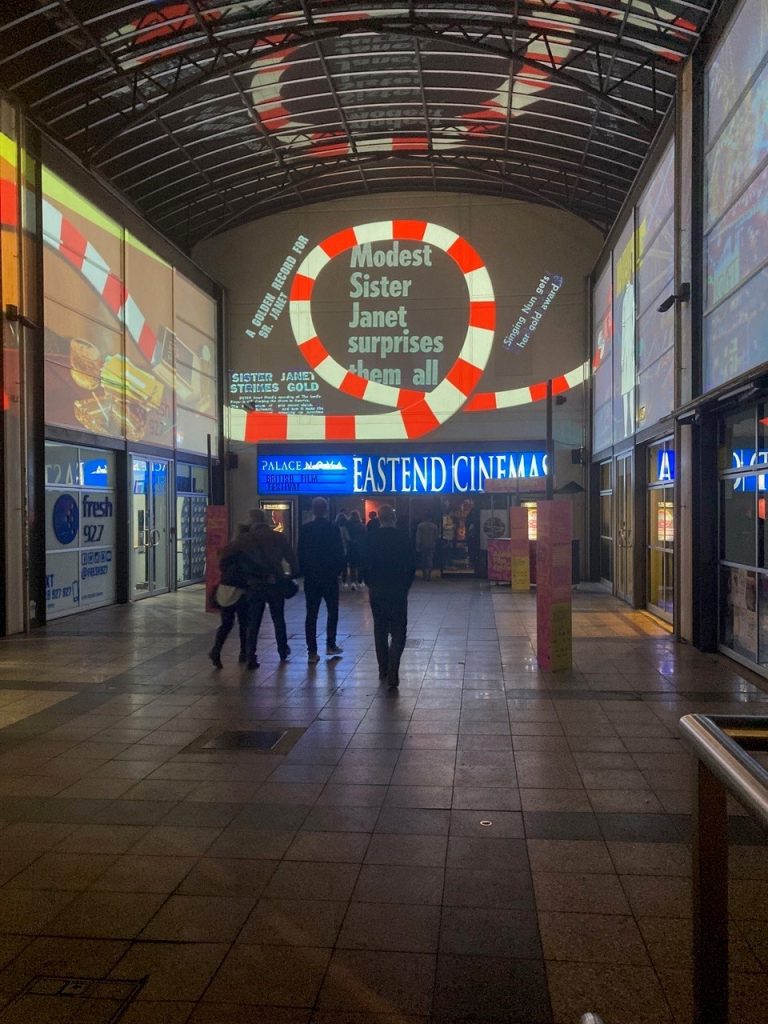 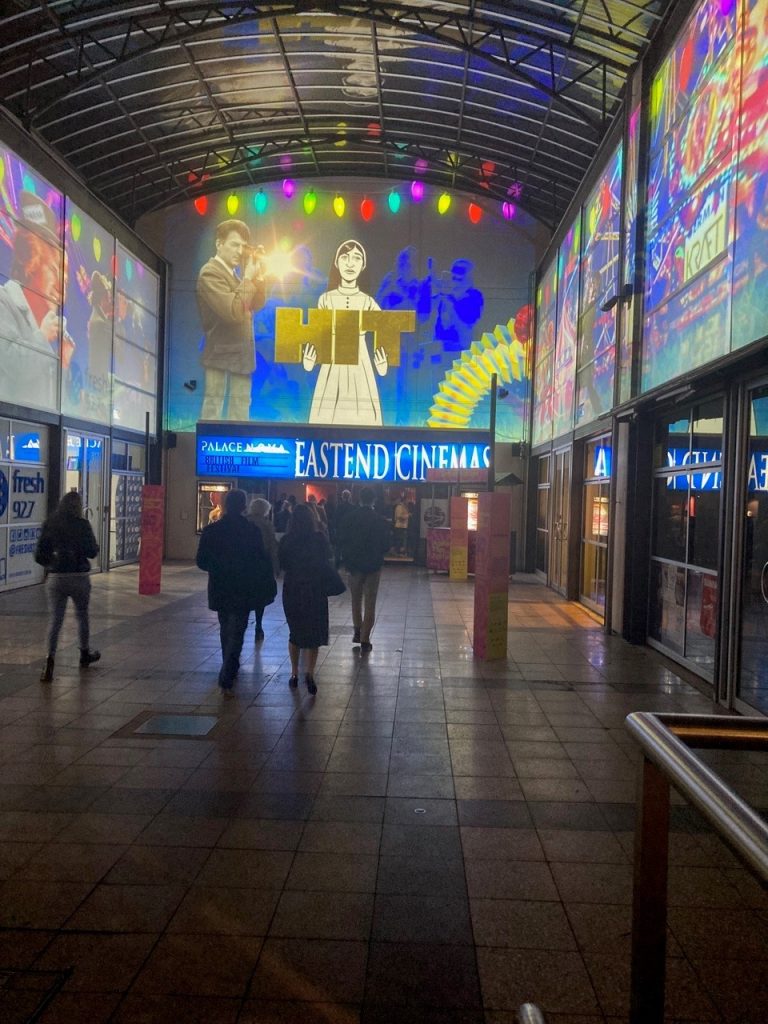 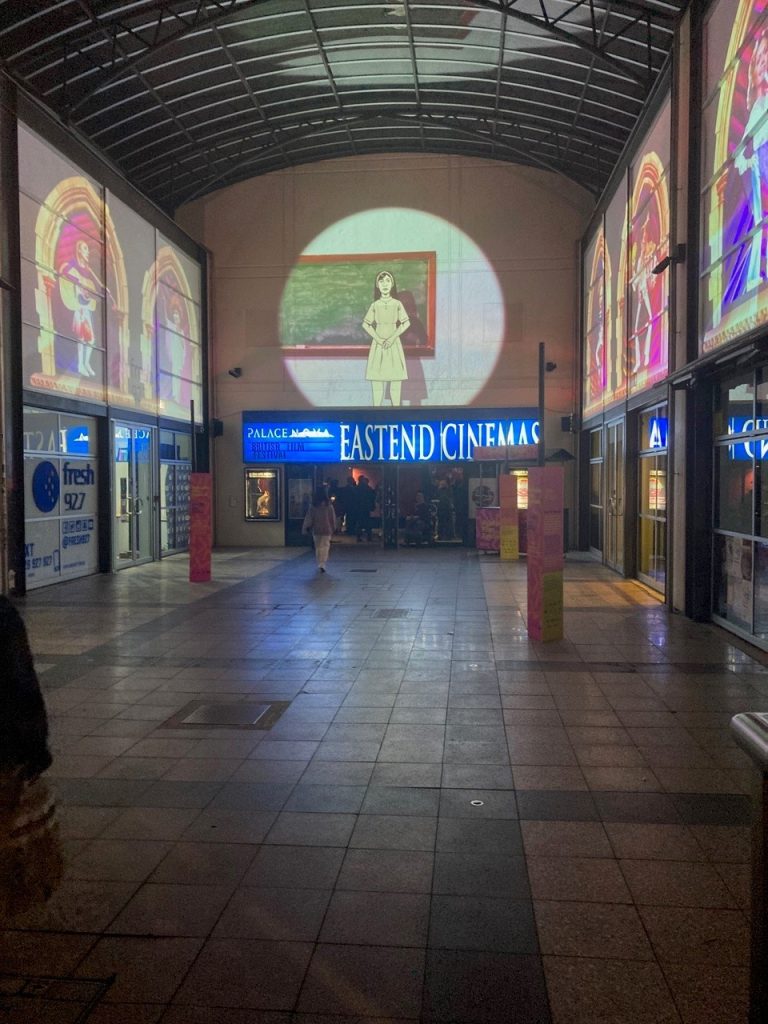 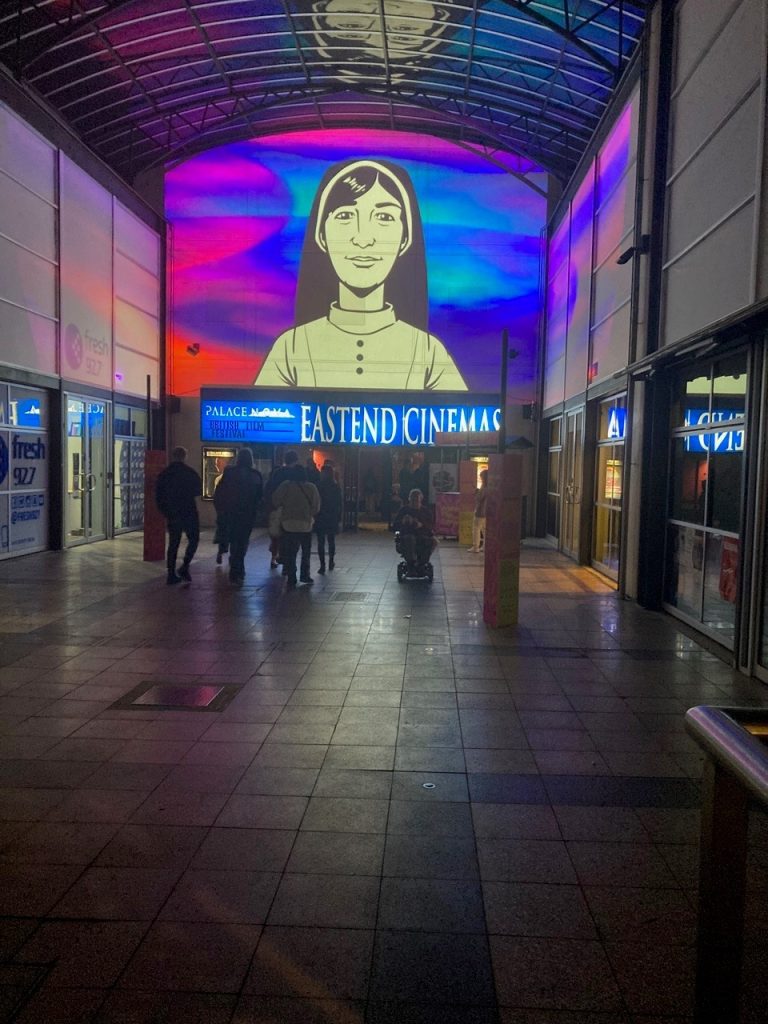 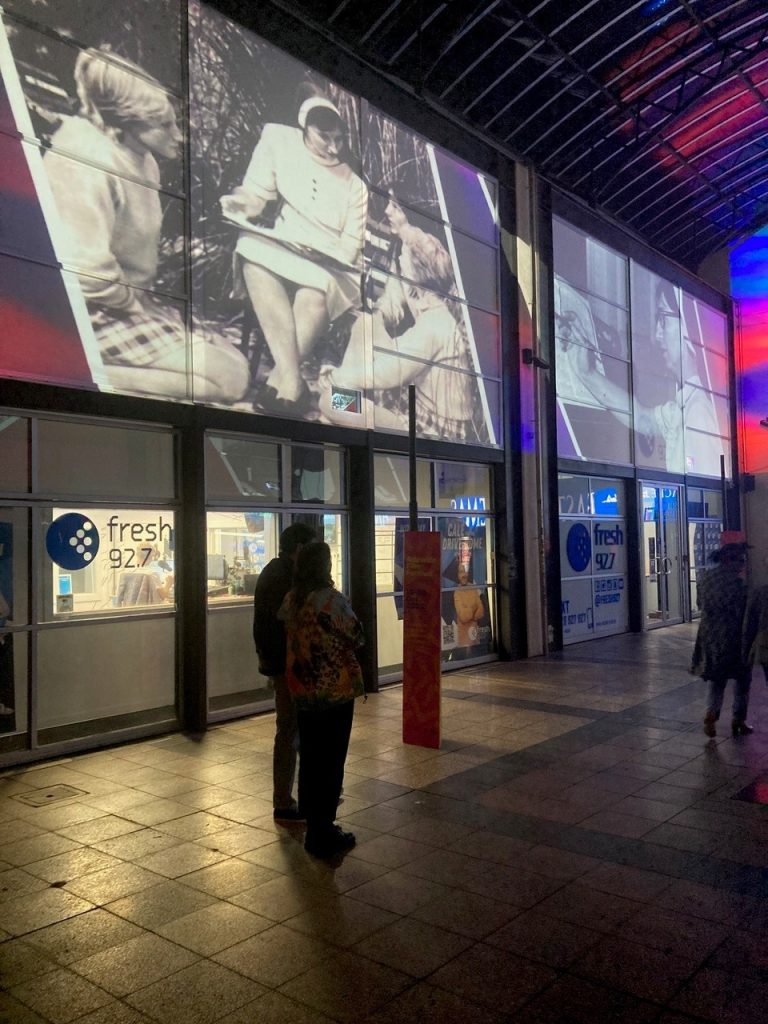 Coincidentally, on the 23rd October, we celebrated the Fiftieth Anniversary Year of the Rock Mass – begun by Janet in July 1972 – as a way of helping young people to become involved in the celebration of the Sunday Eucharist. She focussed on music that attracted them, and involved them in the songs and prayers.

The week before the celebration, Greg Mead SC, a member of the Romero Community begun by Janet (and Janet’s nephew) gave a reflection on the Gospel of the day which was about the persistent widow. It evokes the early days of the Rock Mass which sometimes attracted up to 2,000 people, mostly young!

The following is his reflection.

This story in the gospel about the widow and the unjust judge is about persistence. As we prepare for next week’s celebration of the 50th birthday of the Romero Community Rock Mass the story of Janet’s starting and continuing with the Rock mass is the epitome of that virtue.

None of it was easy: there were the practical realities of begging and borrowing amplifying equipment; getting enough extra chairs into the Cathedral each week to seat the large numbers in the congregation; carting the speakers from the store room in the convent across to the Cathedral; (on occasions she did that herself with the school bin trolley); running off Mass sheets on clunky old Roneo machines or spirit duplicators. In a way, all that was the easy part.

The hard part was the attitudes she had to confront: conservative church people aghast at the idea of electric guitars and drums; people shocked by mass themes that were anti-war, anti-nuclear and pro the poor and suffering all over the world. There were musicians to teach and encourage and inspire even when they were going through various stages of emotional, musical and personality development. There were meetings of the Liturgical Commission where she had to argue the case for the songs we were singing. Someone pointed out that Jesus didn’t teach the ‘Our Father” with a chorus so why were we singing it with one? Someone else asked why we were singing “Gloria” when that was Latin and didn’t we want to get away from Latin? To no avail Janet tried to explain the musical reasons why “Gloria” worked better.

At first Janet thought it would only last for six months and then it would all die down. But the need seemed to be there and she persisted and the 5.45 Mass lasted at the Cathedral until 1999 before we moved first to Goodwood, then Richmond then Brompton and now to the SAC Chapel.

Over the years her persistence has:

This is the persistence that the widow in the Gospel exemplifies and Janet gave us a very contemporary example of persistence in action.

The anniversary Mass was a great celebration. About 250 people gathered – a gathering of those whose lives had been touched by Janet and the challenge of the Rock Mass. The booklet included the names of more than 100 priests who have been celebrants over the years, and it listed the outreach projects which are offshoots of the Rock Mass – or as it is described on the back cover: Life arising from this Mass!

The Sacred Space was decorated with posters and banners. The songs included some old favourites, and yes, the Our Father!, The musicians and singers were in fine form. Fr Phil Marshall encouraged us to celebrate life and to dance, and we did at the end of Mass, the priests joining in, even 90 year old Monsignor Dr. Bob Rice! Many stayed on after to share a cuppa and to chat with old friends. It was a joyous night. It held so many memories of days when we all were younger. Janet’s spirit was alive and well, and she was celebrated by all there. We listened to her clear, young voice singing the themesetter “Corner of the Sky” from one of her records.

We give thanks for Janet’s vision, her compassion, her untiring efforts for the poor of Adelaide and beyond, and for the Rock Mass, which continues to be a joyful, welcoming multicultural Eucharistic community, firmly grounded in the reality of our world, challenging those present to go out from the Mass to make a difference. We give thanks for those who seek to continue her work and keep her vision alive. 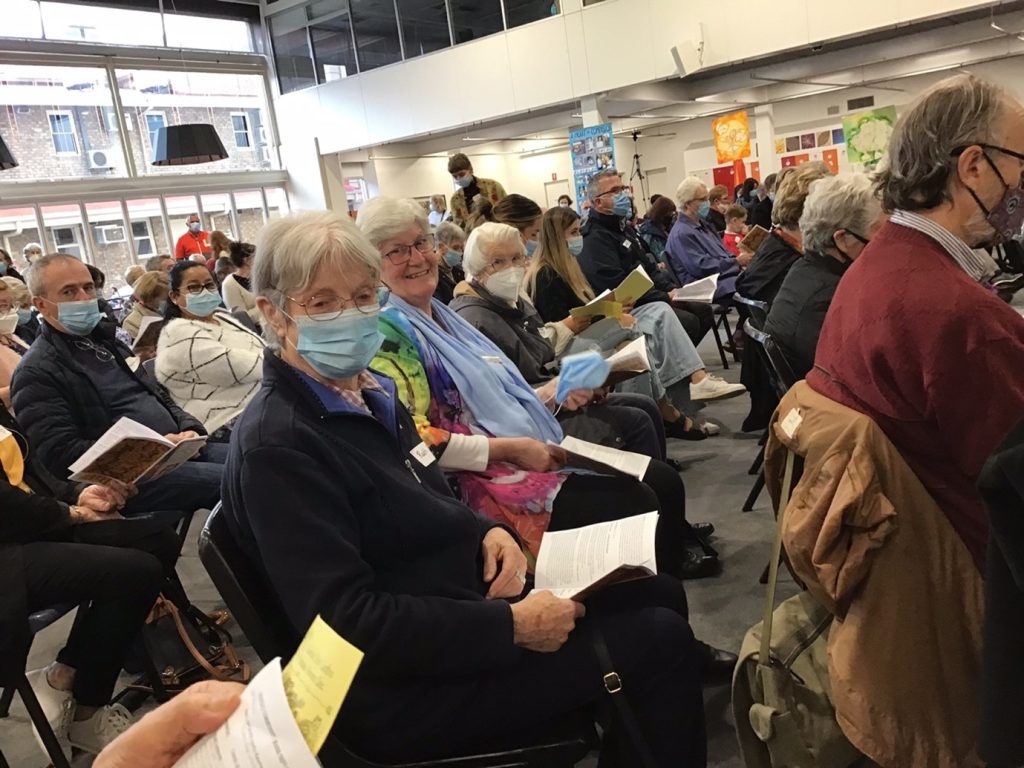 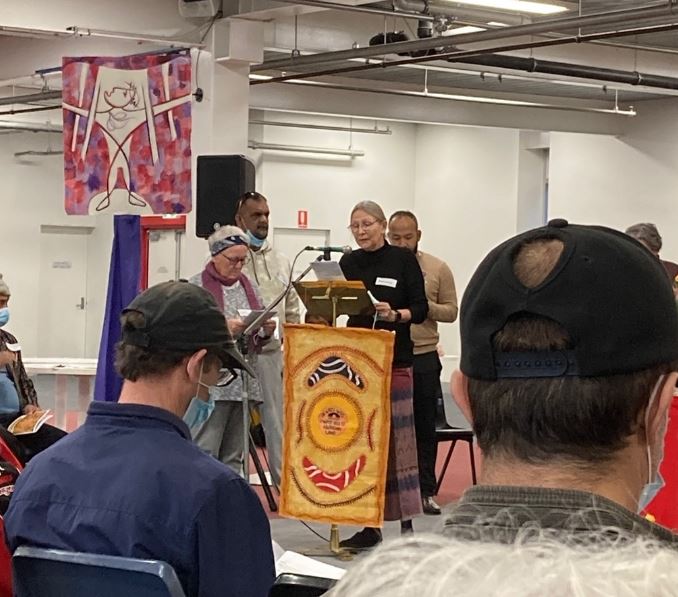 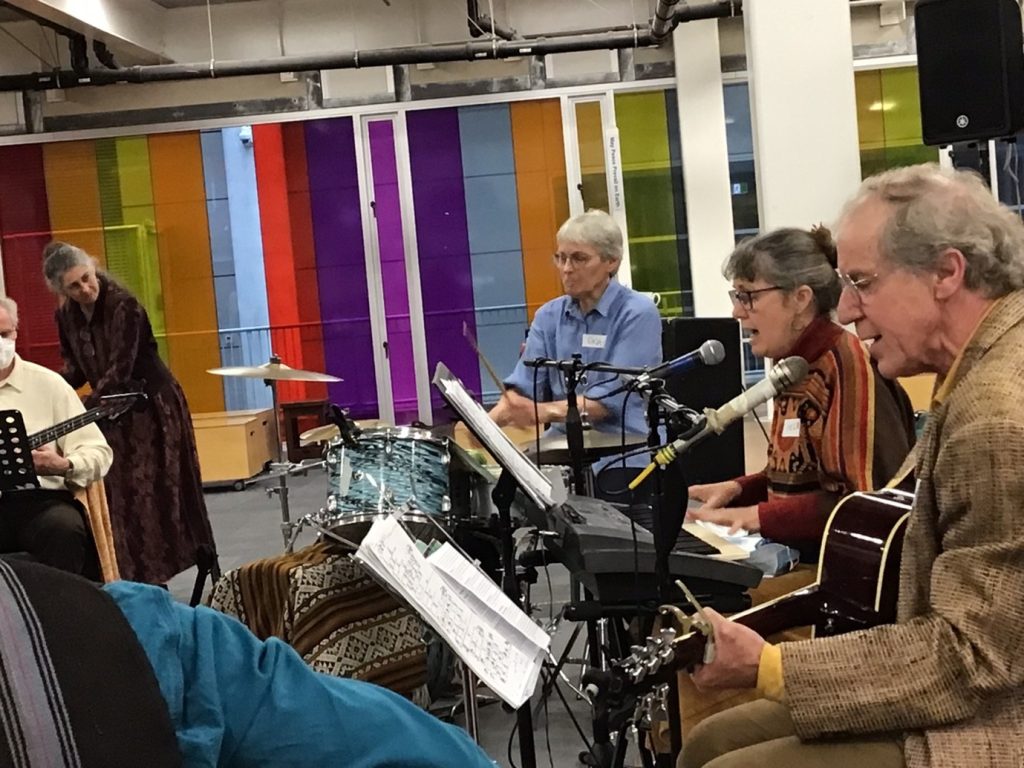 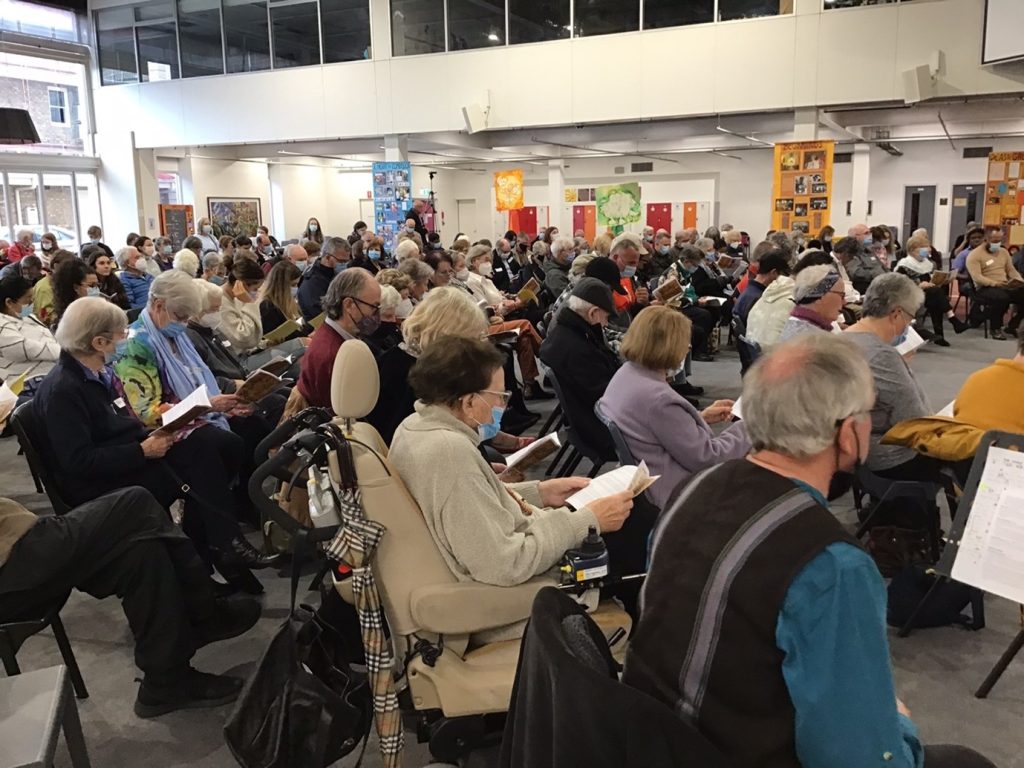 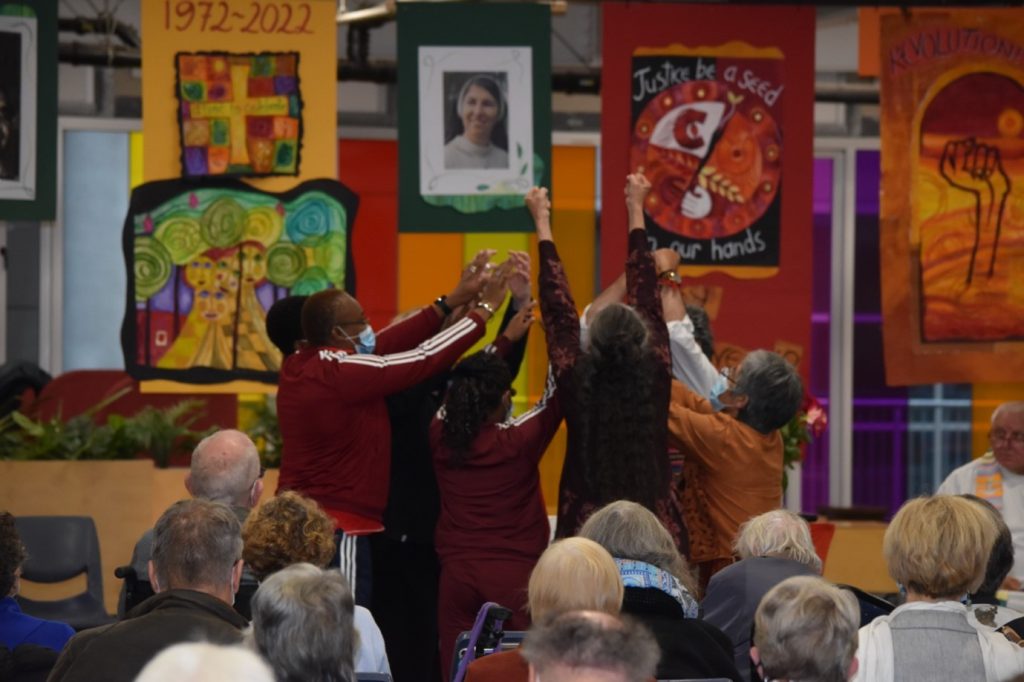 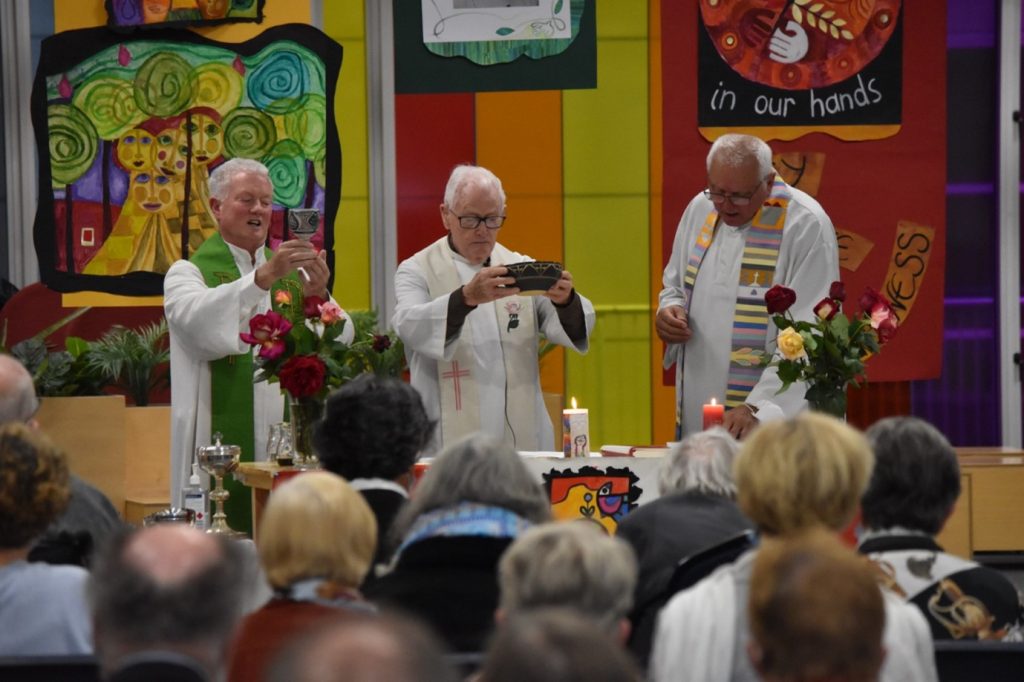 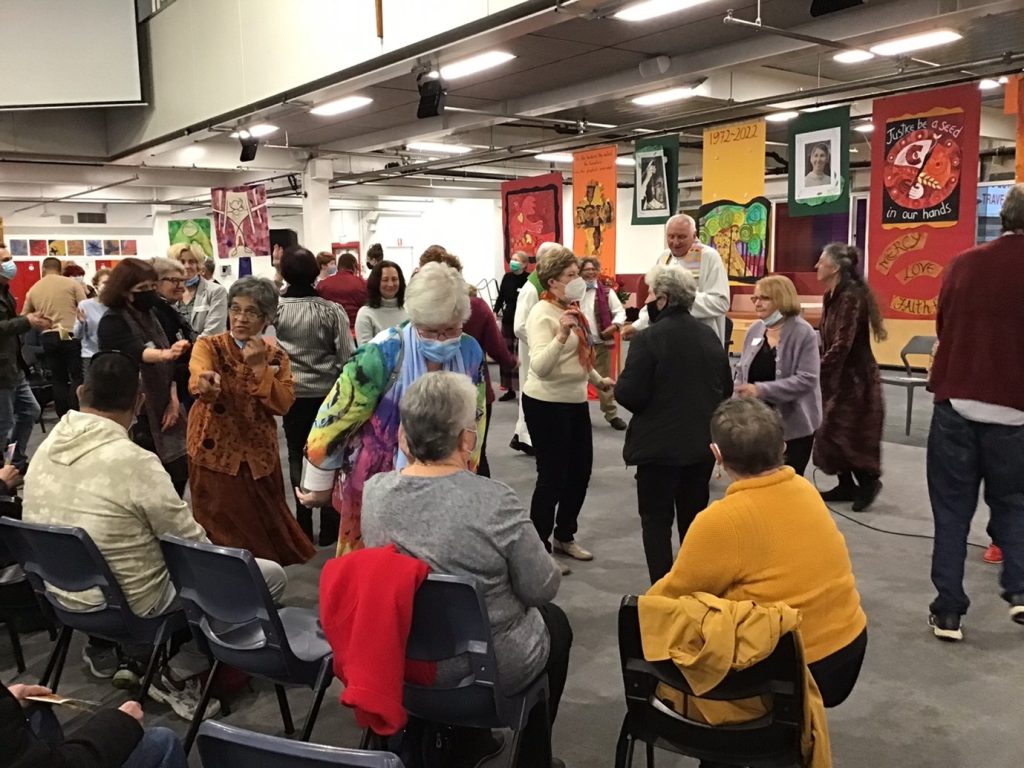 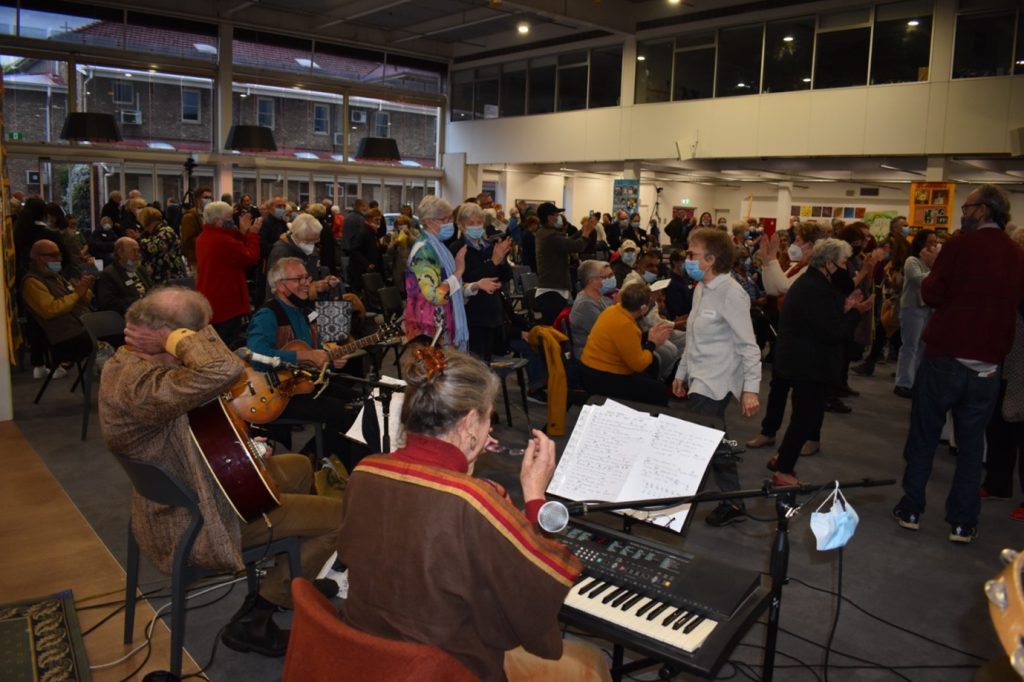 And the dancing continues!