Giving thanks and looking to the future 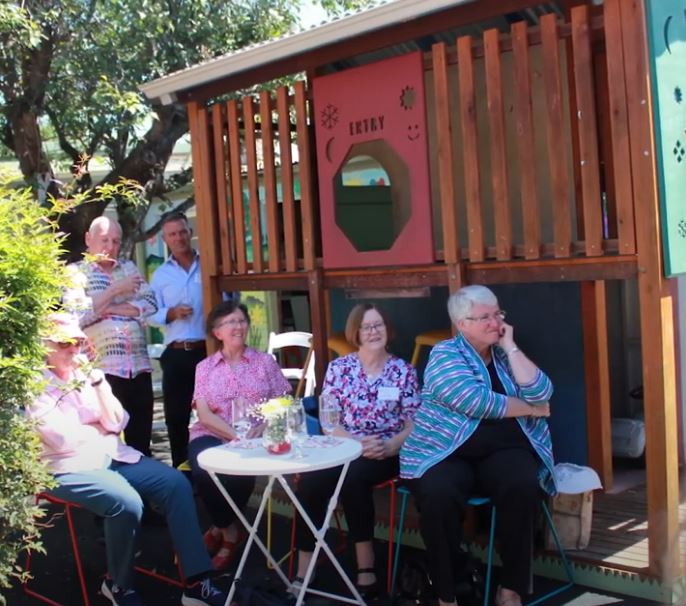 In 2001, at a non-descript home in Melbourne’s west, two Sisters of Mercy, Angela Reed and Carole Carmody waited with a mix of excitement and apprehension for the arrival of the first client of the new Mercy Care service.

They’d just received a phone call to say that a woman needing safety from family violence was on her way. They didn’t know yet what her story would be, or how they could help her. They wondered how their neighbours, who didn’t know anything about the new purpose of the house, would react if they knew what was going on.

Soon, a taxi pulled up. ‘Out stepped a larger-than-life woman, clutching a giant teddy bear,’ Carole recalled. ‘She yelled at the top of her voice: “Is this the safe house?”

Carole’s recollection was among many shared at an event held at the house this February and attended by many former and current staff, volunteers and supporters. It was to mark a major transition: the house will soon be demolished, but the Sisters of Mercy have donated the land to McAuley. A new future will be created: through new funding, 12 transitional living apartments for women and children will be built, expected to open in August 2022.

So the event was both a celebration of service and the work done to support thousands of women and children over the years and a farewell to the building which contains so many stories.

As Carole said at the farewell, that day back in 2001 represented the continuation of the pioneering service set up by Sr Sheila Heywood and Sr Wilma Geary back in 1988. Realising that women leaving family violence had literally nowhere to go, Sr Sheila was propelled by an urgent sense that they must have a place. Operating on a shoestring, with no government funding, and dependent mainly on the two Sisters’ pensions, the house they ran in North Melbourne was often full to overflowing. It was the first 24/7 service to operate in Victoria.

The Mercy Care service later merged with Regina Coeli to become what is now McAuley Community Services for Women.

Speaking at the celebration event, Chair of the McAuley Board Dr Sonja Hood said it was important to acknowledge our history. Though like any farewell, it is tinged with sadness, the future ahead is an exciting one. Sonja said: ‘We’re not done yet: there is so much more to do.’

‘When women tell their stories, they are mine’

Standing at the front gate welcoming all the guests to the event was a long-standing worker, Dawn. She had joined Mercy Care as a volunteer back in those early days when there was no professional workforce, and volunteers, many of whom were also holding down full-time jobs, slept at the house overnight.

Dawn is the keeper of many of those stories: of the tree, she and Carole planted at the front garden; of all the symbols in the hand-painted mural running around the two units at the back (named for Sr Sheila and Sr Wilma); and the three-week project to create it together with women and children.

Dawn still works at what is now called McAuley Care. The stories of the women and children resonated with her because she too has lived with family violence. ‘I didn’t know it had a name, or realise what it meant until women told me their stories and I knew they were mine,’ Dawn says. ‘McAuley Care is my home, and even though I’ve worked here 17 years, I never want to leave.’