From the diary of Sr. M. Aloysius O’Connell

On 31st August 1875, a group of pioneering nuns from Ennis, Ireland arrived in Singleton to establish a Convent of Mercy.

One of those who made the journey was Maggie O’Connell, later known as Sr. M. Aloysius. At the time she was a seventeen year old postulant who had heeded the call to come out to Australia. In her later years, Sr. M. Aloysius wrote an account of the sisters’ journey to Australia.

Margaret O’Connell was born in 1858 in Limerick, Ireland. In our archival collections, we hold her First Communion certificate, date 25th March 1869 at the Church of the Convent of Mercy in Tralee. Maggie had two older sisters that had already joined the Sisters of Mercy. In 1874, Dr Quinn, the bishop of Bathurst came to Ennis to see if it was possible for the sisters to send a foundation to Australia.

Sr. M. Aloysius would write of the visit:

“He arrived toward the end of the year, was shown through the schools, took a great interest in the senior classes and asked as he scanned the faces of his auditors, “How many vocations here for Australia .”One of the number immediately felt a desire to go and persevered in her vocation thought strongly opposed by her oldest sister, who was a member of the Ennis Community. Her mane was Margaret O’Connell.”

A trip to Australia in those days would have been a daunting undertaking, Maggie wrote: “Very little was known about Australia in Ireland in those days. It was looked on as being as far off as the Polar regions.”

She also related in her account the various sites the sisters saw on the voyage:

“The Suez Canal was too narrow for two steamers to pass one another. An office was at each end of it. When a steamer entered the Canal the officer ‘phoned to the one at the other end and the second steamer had to wait till the first arrival was through. We had to wait and had some time in the Bitter Lakes looking at the bleak country about us. Our passage through the Canal was disagreeable. There was very little water in it and the mud gave great trouble. After leaving the deep blue waters of the Mediterranean the muddy Canal was ugly in the extreme. The passage through the Red Sea was more interesting. The gentlemen were always ready with their field glasses to point out anything worth seeing. We saw a mirage. It was hard to realize one was not gazing on a sheet of water.”

Once the Sister’s had arrived in Australia, and made the journey to Singleton, they were welcomed to the community:

“They set off for their final destination, Singleton which they reached about 9.30 a.m. on the 31st August. 1875. The Bishop accompanied them. They were driven from the railway station to the Church where benediction was given. When the sisters go to the Church processionally the juniors walk first. So when the crowd saw the three postulants heading the little band from the sacristy they thought they were the superiors of then party and could not resist from remarking to one another “Aren’t they very young looking creatures.”

Maggie O’Connell was received 9th January 1876 and was professed on 26th September 1878, taking the religious name Sr. M. Aloysius. The next year she would be one of the sisters sent on foundation to Gunnedah.

Sr. M. Aloysius was the longest surviving sister who made the long voyage from Ireland to Singleton, passing away in 1946. Her obituary in the Singleton Argus was as follows:

DEATH OF NOTABLE SISTER OF MERCY: The death occurred recently, at Mater Misericordiae Hospital, Waratah, of Sister Mary Aloysius O’Connell. The deceased Nun was 88 years of age, and was the last of the pioneer band who in 1875 establish-ed the first Convent of Mercy at Singleton. She was clothed in the habit of religion in January, 1876. After her profession in 1878 she labored at Raymond Terrace and Murrurundi, and was one of the pioneer Sisters sent to Gunnedah, at the time a branch convent of Singleton. Apart from her work in education, Sister Mary Aloysius rendered much administrative service to her community, both as superior for many years at East Maitland and at Hamilton, and in the capacity of mother assistant or bursar over a period of 18 years. After an Office and Solemn Requiem Mass in the Convent Chapel, Singleton, the remains were laid to rest in the Convent cemetery. (Singleton Argus (NSW : 1880 – 1954), Wednesday 23 October 1946) 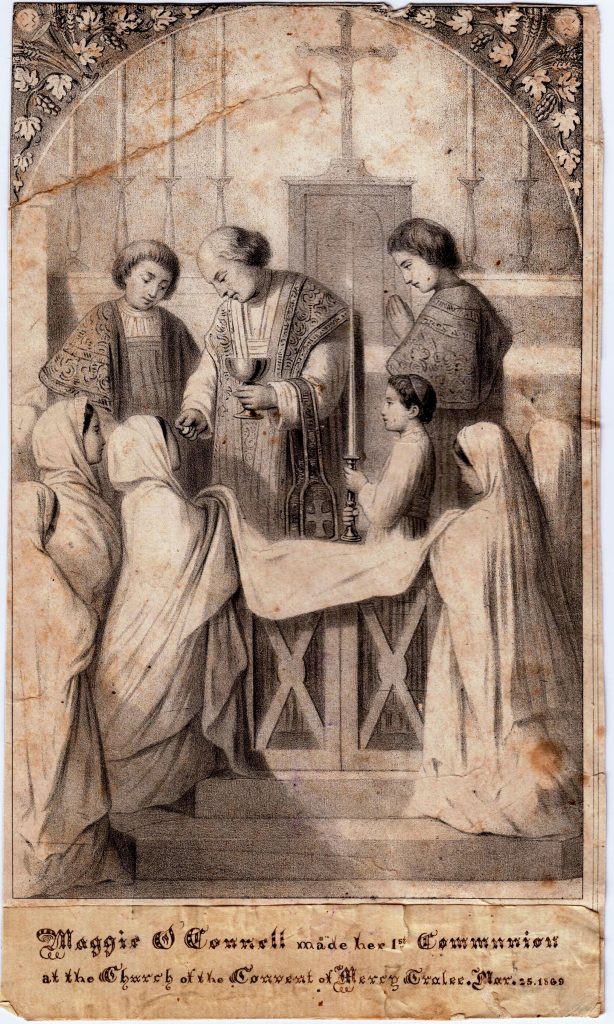 Margaret O’Connell’s First Communion certificate, date 25th March 1869 at the Church of the Convent of Mercy in Tralee