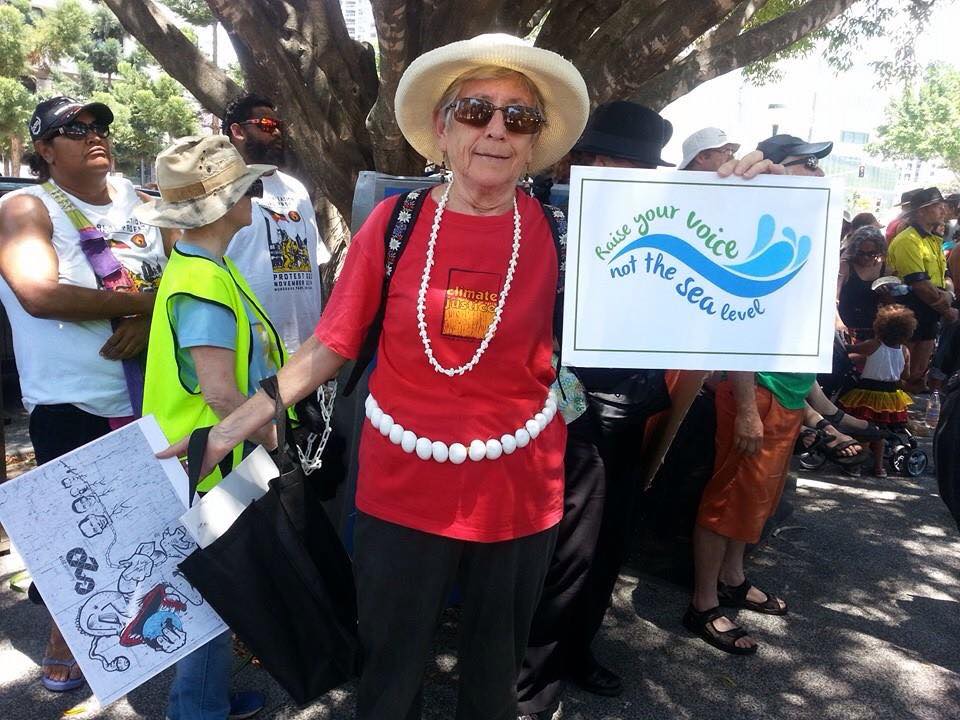 Sister Wendy Flannery’s recent election as the Australian Vice-President of the Women’s International League for Peace and Freedom (WILPF), is just another milestone in her long history of advocating for justice and peace both locally and internationally.

Wendy, who lives in Brisbane, has been a member of WILPF, the first International Women’s peace organisation, since 2013.

“I first found out about WILPF when I was helping set up the Sisters of Mercy presence at the United Nations in 1999.

“Some years later I ended up getting one of WILPF Queensland’s Peace Women Awards, and it was then that I decided to join”.  WILPF women had collaborated in events for Harmony Day, the International Day of Peace and the International Day for the Elimination of Violence Against Women, which Wendy organised through ‘Believing Women for a Culture of Peace’, a Brisbane-based women’s multi-faith and multicultural association which Wendy initiated in 2003. 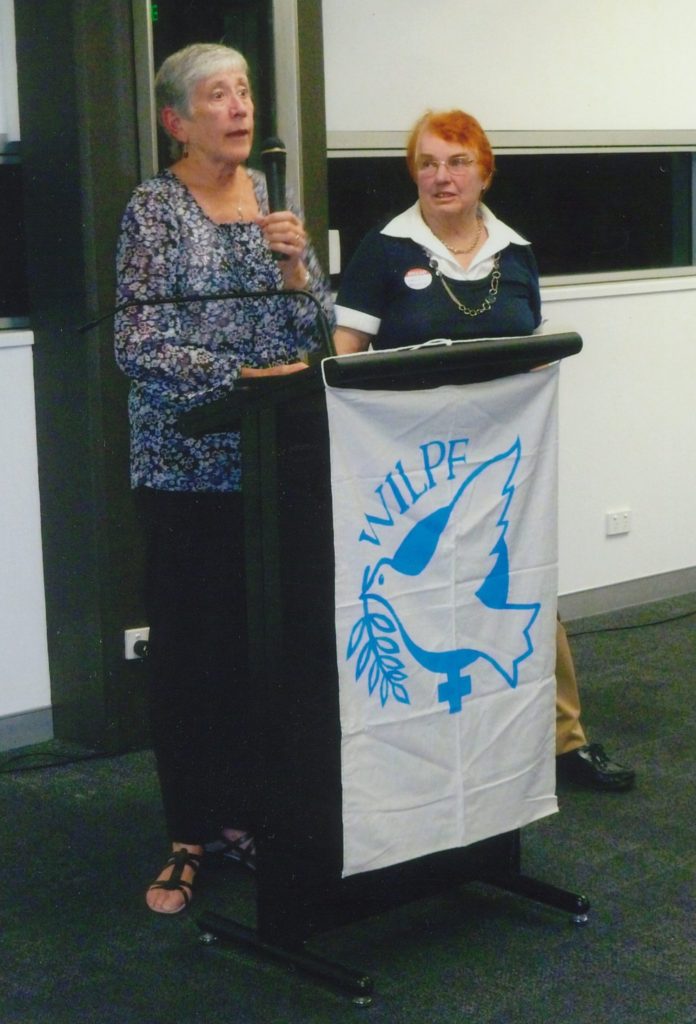 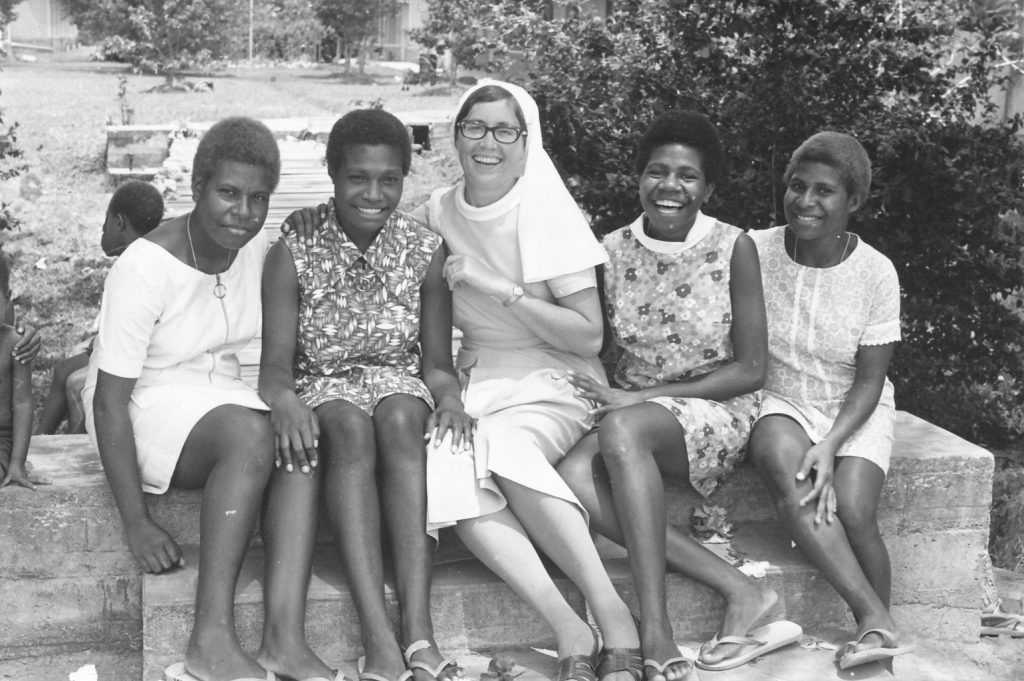 Wendy with students at the Mercy Secondary School in Yaropos, Papua New Guinea in 1971

A seminal moment in Wendy’s life came in the late sixties when she was sent to Papua New Guinea, prior to making her final vows,

Sent to the Mercy Secondary School outside Wewak to teach secondary students, little did Wendy know that this appointment would shape the rest of her life, one where she would go on to work at an ecumenical Institute for Papua New Guinea and the Solomon Islands, the Melanesian Institute, afterwards to set up a justice and development program for the Pacific Islands Bishops Conference based in Fiji, and then globally at what is now the Mercy Global Action Office at the United Nations.

“Influenced by the teachings of the Second Vatican Council, I arrived in Papua New Guinea with a strong sense that working to respect people’s cultures was part of working for justice.

“This was somewhat new thinking for the Catholic Church, very different from the previous church practices of blanket condemnation of people’s cultures and forcing people in non-Christian countries to give up their cultures to become Christian.

“I was very lucky that my last two years of high school at All Hallows, in 1960 and 1961, coincided with the lead up to the Second Vatican Council. Two of our teachers, Sr Kath Burke and Sr Catherine Courtney got right into the new thinking that was emerging, which influenced me then and today”. 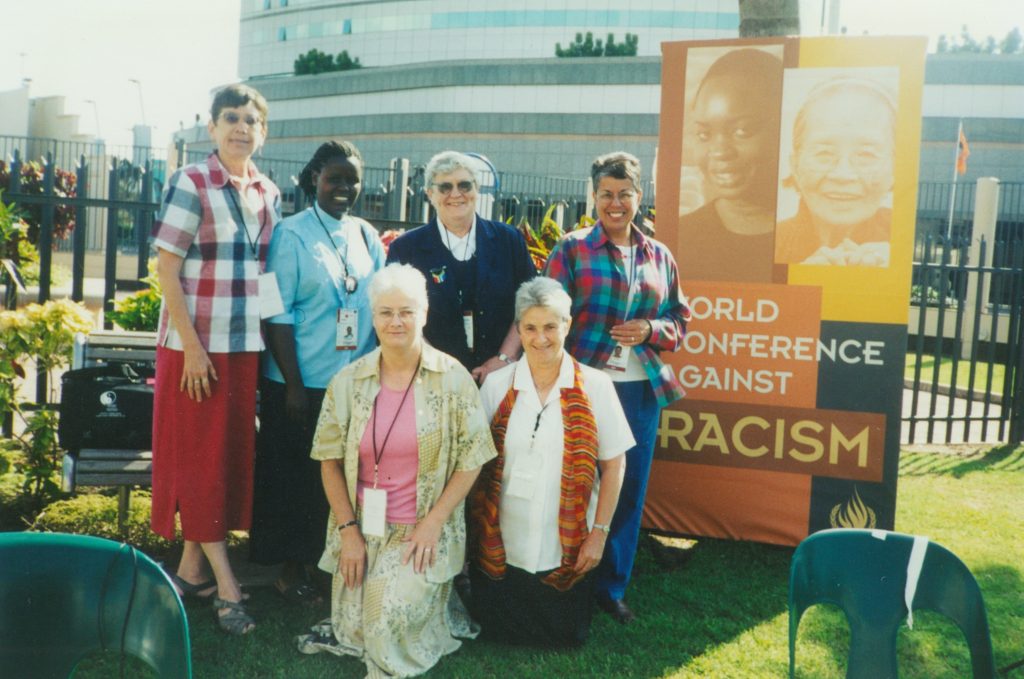 International Mercy Team at the World Conference Against Racism in Durban in 2001 (Wendy is in the back row far left).

During Wendy’s time in the Pacific she was asked to be one of the Vatican Delegates at a World Council of Churches convention in South Korea on ‘Justice, Peace and Integrity of Creation’ in 1990.  She had been involved with a small group of Pacific women organising preparatory women’s consultations in Tonga and the Marshall Islands.  Without knowing it at the time, her attendance at the convention was merely an entrée into her future work for issues of justice at a global level.

“Establishing the Mercy Office at the United Nations was something that like most major events in my life I took on because I was appointed or invited.

“The office was first proposed at an international meeting of Mercy leaders in Dublin in 1996.  Also invited were Sisters from around the world involved in justice and peace work. It was decided at that meeting that we would set up a Mercy Justice network and an international connection at the United Nations.

“The following year the late Jan Geason RSM, President of the Institute of Sisters of Mercy of Australia at the time, said she was going to a meeting of the leaders in Dublin and that they were going to decide who was going to setup the office in New York.  She said she had no nominations from Australia and asked if she could nominate me.  I said ‘Oh yes, I suppose that’s okay’, thinking it was the last thing that would actually happen!”.

“The meeting invited a Sister from the US and me to take on the task, and I then spent three and a half years setting up the international Mercy connection at the United Nations”.

More than 20 years of working in the Pacific Islands and ecumenically, had a profound influence on Wendy’s time in New York.

“I brought with me agendas that I just couldn’t drop such as environmental issues, racism and women’s rights”.

Carrying on a connection that began with Catherine McAuley’s formative years living with the Callaghans, Wendy said the Mercy office developed a strong involvement with the Quakers, who had an office in the same building.  They shared a joint interest in focusing on racism, and the Quakers asked Wendy to work with their interns on this agenda.

“The Third World Conference Against Racism (WCAR) was held in Durban in 2001 and I organised an international Mercy contingent to participate, including Sisters from Africa and Latin America.”

Wendy said that while she was in New York she came across a notice about an upcoming screening at a university of a film on climate change in the Pacific and it reawakened in her many of the experiences from having worked in the Pacific.

“I started getting concerned about it and I managed to get in touch with the woman who made the film and I eventually organised the first event in the United Nations building of Small Island State ambassadors – from Tuvalu, Samoa and the Maldives – speaking about climate change following a screening of the film”.

Maintaining a focus on peace locally 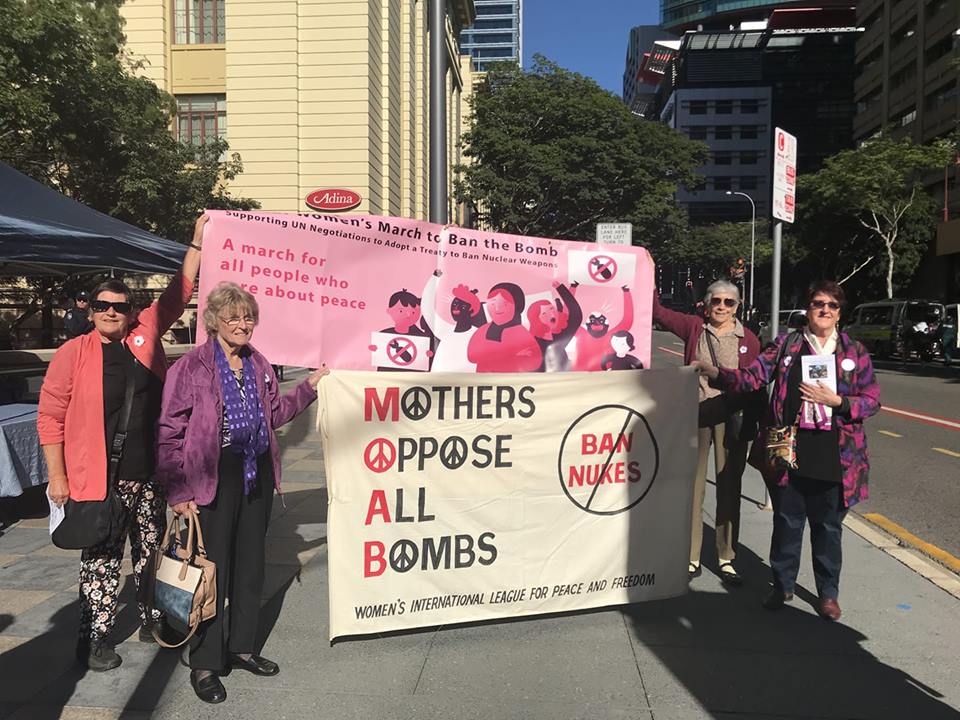 Wendy (back row right) a UN Peacekeepers Commemoration 2018 in Brisbane

Moving forward to 2021, the seeds that were sown from both her time living in the Pacific and in New York has blossomed in Wendy who is still passionate and focussed on achieving climate justice for the Pacific.

“The very first protest I ever joined was against French Nuclear Testing. When I was living in the Pacific they were still doing testing in Polynesia.

“The devastating environmental and health impacts of this testing are coming out now.

“One of the major issues WILPF is focussed on is the new United Nations Treaty to Prohibit Nuclear Weapons, which includes a clause about compensating people who were victims of nuclear testing.

“We have been working with local councils in Australia to get them to endorse it.

“Ultimately the Australian Government would have to ratify the international treaty but we are trying to work through local government councils as part of a staged approach with all levels of government.

When asked how many protests she has been to in her life, Wendy rightly says she couldn’t remember how many however she immediately recalls her most recent protest in Brisbane in June at a Land Forces Weapons Expo.

“One of the things we learned is that Australia is aspiring to become one of the ten top weapons producers in the world and that there are six places in Brisbane alone where they create weapons.

“Our WILPF group decided that we would join in a movement to protest the weapons expo, in a peaceful way.

“I saw two men with a camera and I thought I would give them one of the flyers I created and it turns out they were from the ABC and they asked me if I would be interviewed.  I appeared for about 10 seconds on the evening news”.

Wendy said that in the face of growing conflict in the world there needed to be new ways found to build international diplomacy.

“One of the drawbacks of the UN is that the only group that can make firm decisions is the UN Security Council. You have the five permanent members of the security council and inevitably you are going to have clashes among its members.

“My question is: who is putting resources into peace making? There are a lot of groups and organisations, but they get very little publicity.

“Sadly there is the potential for more conflicts in the future due to the way we have treated the planet in terms of destroying the natural resources. There is the likelihood that there will be more and more conflicts emerging because of environmental issues”.

The promise of the Gospel will prevail 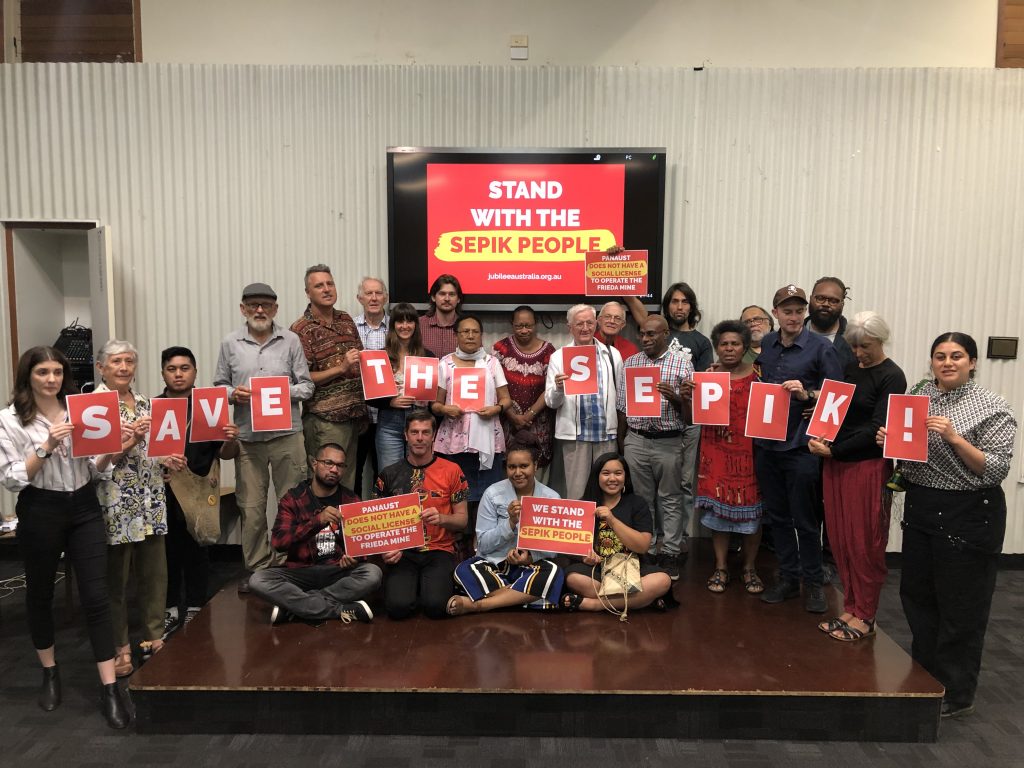 Wendy (Second left) standing with the people of Sepik in 2019 against the establishment of the largest ever mine in Papua New Guinea.

After many years of advocating for justice, when asked how she keeps going when some of the issues of injustice facing the world have become more dire, Wendy said that she still has hope that goodness will prevail.

“This the fundamental Gospel story.

“Our Creator has set the whole universe story in motion. We don’t know where it is heading.  But our hope is based on our belief in Jesus’ central message about ‘life, life in all its fullness’.  This provides us with a positive vision of our world and what we can be together.”