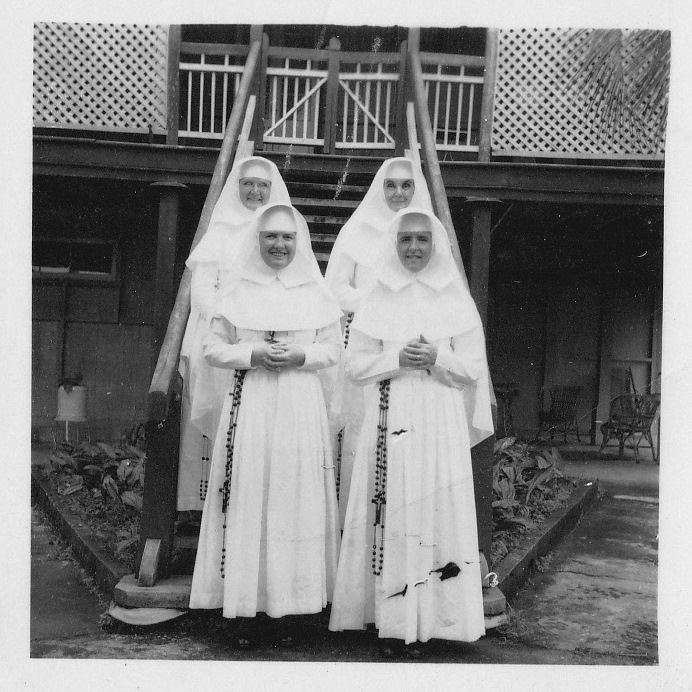 Sisters of Mercy Edmonton Community in 1956 outside the Convent.

ISMAPNG Archives hold annals from the former Mercy Congregations. These records, sometimes handwritten and sometimes typed, provide historical insight into the daily occurrences at each Convent Community throughout the years. As part of the ISMAPNG Cairns Archives, the Edmonton Annals of 1956 dramatically describe the local community encountering Cyclone Agnes.

‘A devastating cyclone swept northward striking Cairns and district on March 7th.The weather previously had been extremely warm and winds, insect-laden heralded the approach of the cyclone. On Tuesday 7th morning early, a strong wind was blowing, nevertheless a fair number of children arrived for school. A terrific gust of wind shook the whole building and immediately, Sisters and children moved over to the music-rooms for shelter, where they remained until the now-alarmed parents arrived to rescue them and remove them to a place of safety. The wind continued to rise all day and as we sheltered in or outside the music rooms, we watched the School verandah, railings and roof rise and whirl like paper, some pieces of iron and posts landing across the railway line. Our first big scare was seeing the wall of the Church sway backwards and forwards. With real fear, we entered the Church and removed the statues from their pedestals and put out the Sanctuary lamp. By this time – 11 a.m.- the roads were strewn with live wires… Our enclosure was violated as one by one the veranda lattice gave way and were hurled hither and thither leaving us exposed to public view. About mid-day we noticed the Church roof had commenced to rise and we feared for the whole building. Kindly neighbours looked in to inquire about our welfare … As the afternoon wore on, we became more alarmed and moved into the Refectory for safety where we intended to pass the night. Having collected some bread and cheese and the requisites for tea, we installed ourselves in armchairs and tried to say some prayers. But they were distracted ones. Afterwards, about dark, we heard a voice outside – it was Father Mullins and Father Jones who had been sent out from Cairns to remove the Blessed Sacrament from the Church and Convent and also to take us into St. Monica’s Convent of Mercy, Abbott St. Cairns for the night. No one hesitated and Father Jones, picking his way over broken lattices and almost blown backwards, succeeded in removing the Blessed Sacrament and reached the car outside in safety. …The night passed peacefully for us, safely sheltered behind concrete walls, but next afternoon, on our way home, we passed through a town and district of broken and shattered homes and reached our Convent to find it safe and sound, save for the broken lattices.’