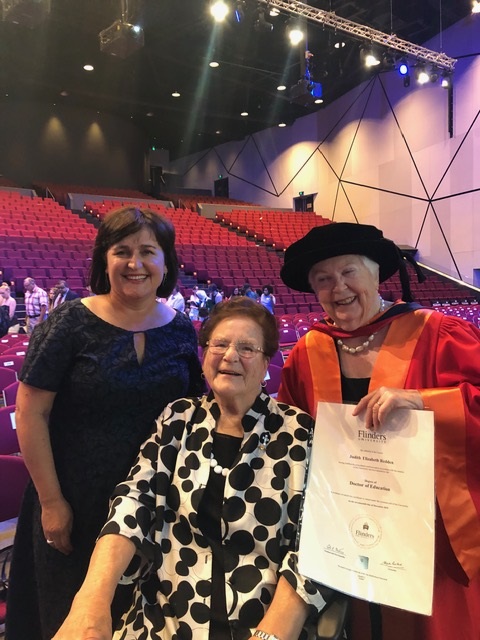 Judy Redden RSM has received the Chancellor’s Letter of Commendation for her Doctorate of Education from Flinders University.  To commemorate Sr Judith’s graduation, the Adelaide Advertiser newspaper printed the following article on December 18 2019.

After more than 40 years of study, Sister Judith Redden is ready to hang up her graduation gear for good.

The 78-year old, a member of the Order of Australia, began studying a Masters in Education Administration at Flinders University in 1976 and another maters degree in education in disadvantaged urban areas at the University of London shortly after.

Yesterday, Sister Redden, from Prospect, finally graduated with her Doctorate of Education and said she will now put aside the study for a break.

“I’m 78 now, so I think I can have a rest from that, I’d quite like to read some books,” Sister Redden said.

But she’s already on to the next thing, serving as deputy chair of Carrington Cottages, and assisting the opening of a boarding house in Waymouth St – both places for people to go when they have no where else to turn.

“Our next project is to look at older women, 50 years plus who find themselves out of a family, out of work, out of a place to live…and they just need some help moving forward in a positive way,” Sister Redden said.