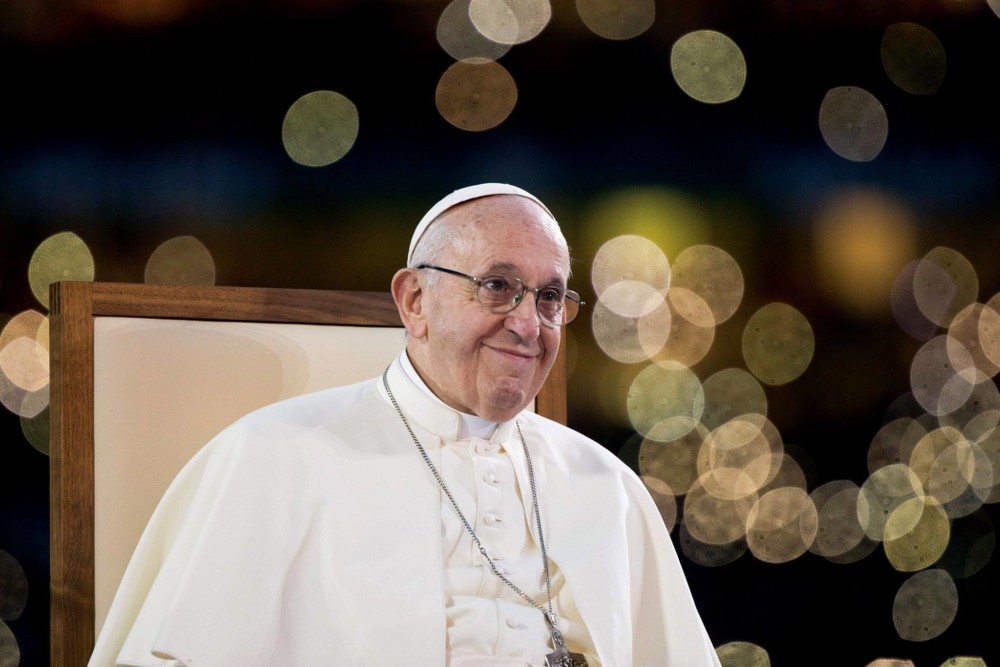 Breda O’Reilly RSM attended the recent World Meeting of Families 2018 Congress in Dublin. Breda gives an account on each day’s activities as well as the notes she took from each of the talks:

In his letter for the World Meeting of Families 2018, Pope Francis asked that the event and its preparation would give families the opportunity to have a way of deepening their reflection and sharing the content of The Joy of Love (Amoris Laetitia).

The Congress took place in the Royal Dublin Society and offered a number of programs, discussions and prayerful activities. The highlight for each day was the celebration of the Eucharist.

Before I left Perth (WA) for my home town in Dublin, I had asked a friend at Booterstown in Dublin to get some tickets for me. I thought I was getting tickets for Saturday and Sunday ( which were the free days), but to my great surprise didn’t my friend order tickets for the five days. I was so excited!

There were eight different topics to choose from and you could go to two talks in the morning and one in the afternoon. In the afternoon there was a general talk given by an Archbishop from various countries around the world. This was followed by family stories and anecdotes about family life around the world. There were thirty or forty stalls selling a variety of things. 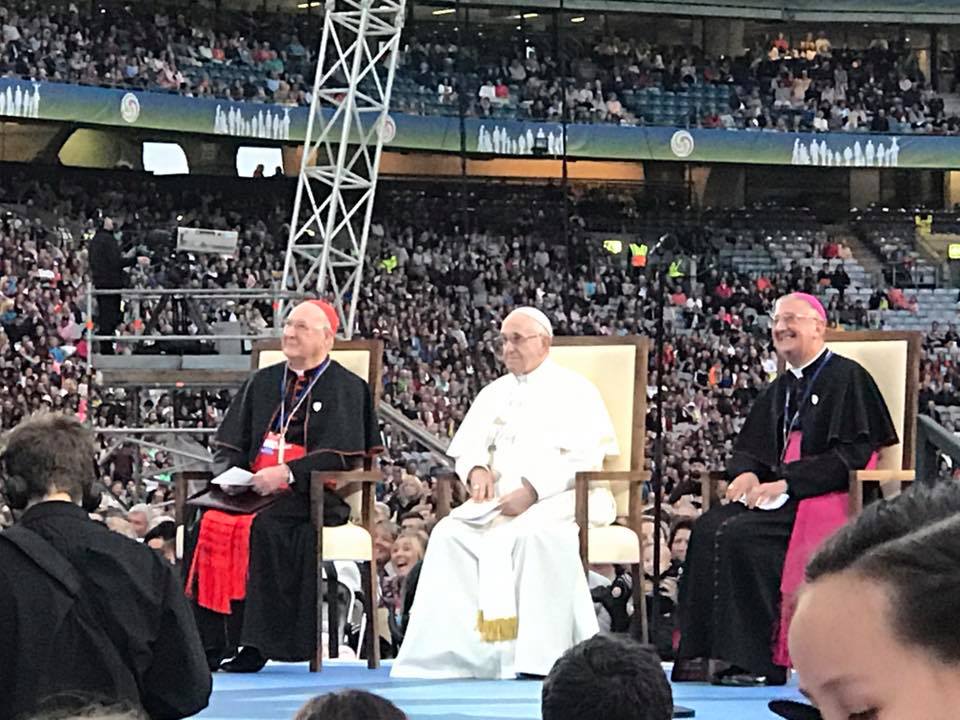 On Thursday morning 23rd August I attended one talk before lunch. I chose to go to ‘Family, Faith and Development: The Witness of Women in Leadership’. It was fantastic. The talk was introduced by Fiona Fintan, Deputy Executive Director of Trócaire ( Trócaire means Mercy in Gaelic). She talked about how women are key to unlocking the potential of developing countries around the world.  Trócaire’s Women’s Empowerment Programme strives to ensure that the women and girls they work with throughout the world have a voice in decisions that affect their lives, within their homes, communities and beyond, and that they are free from violence. She talked about the successes and challenges for women in leadership:

The next speaker was a Chinese woman named Jestina Mukoko.  She spoke about leadership through formation and leadership in the home:

Another speaker was Yvonne Aki-Sawyer the Mayor of Freetown in Africa. Yvonne had been trained in international finance in setting up an NGO to support children. She put up her name for Mayor and got it. She believed she had enough training in finance to help Sierra Leone sort out its financial problems:

Sister Brigid Tighe Executive Director of Caritas Jerusalem spoke next (unfortunately I took no notes for this talk).

After these talks we had a long lunch break (there were thousands of people to feed!), and this was followed by one of the Cardinals reflections by various families in the world.

On Friday 24th August I attended one talk before lunch. Oh what a talk. It was given by Seamus O’Connoll, Professor of Sacred Scripture, Maynooth, Ireland. He is a priest of the Diocese of Kerry, Ireland. The two people on his team were Jessie Rogers and Philip Carder. Jessie is a wife and mother, who teaches Scripture at the Faculty of Theology in Maynooth. Phillip is a husband, Father and grandfather, and a permanent deacon in the Archdiocese of Armagh, Ireland. I felt like I was on retreat for the hour and a half. The theme was ‘Lectio Divina in Home and Parish’: 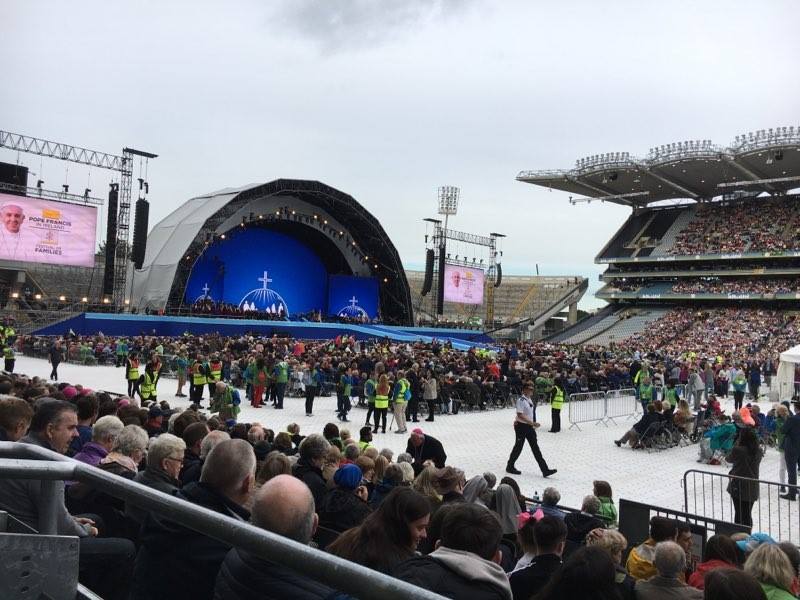 After a lunch break we had a talk given by Cardinal Vincent Nichols of Westminster. He was fantastic. His theme was ‘ Support and Preparation for Marriage in the Light of Amoris Laetitia’. Some of the points he addressed were:

We had a short break before we had a beautiful Mass. After Mass, two Presentation Sisters and a Sister of St Brigid, had a quick tea and we went to the big hall for the Irish Concert.

The Irish Concert was put on by the group ‘Bru Boru, Cashel County Tipperary. It was just fantastic. It went from 6.30-8.30pm. There were twelve people in the group. They all had different instruments. They had the opportunity to play as a group and then individually. There were three fantastic male singers and a female singer who did a great show. Two young men and two young women did the Irish dancing.

Saturday 25th August was the Concert at Croke Park for the World Meeting of Families. There was an estimated 68,000 people at the concert. Pope Francis came to the concert and there was great excitement. He was driven around in Popemobile waving and smiling to great cheers and welcome!

The main singer for the concert was Andrea Bocelli – Italian Tenor. Other performers included:

It was a memorable evening never to be forgotten. Pope Francis also gave a speech and you could hear a pin amongst the 68,000 people!

Sunday 26th August was the closing Mass World Meeting of Families. It was at Phoenix Park and over 200,000 people attended the Mass.  Everyone had been warned to go early as there would be a lot of walking for everyone.  I went with two Sisters from Booterstown. However, as they had a different type of ticket from the one I had we went by the DART together and then went our separate ways. After an hour and a half of walking and just as I was getting close to the Phoenix Park gate a woman spoke to me and asked me was I on my own. I said yes. She wanted to know what kind of a ticket I had. I showed it to her. She said ‘ Oh, this is a standing ticket. I have a sitting ticket to give away would you like it?’ I was so excited! Imagine I was going to be standing for the whole two hours or more for the Mass and now I had a sitting ticket! I was over the moon! When I found my seat I discovered it was only ten or so rows back from the altar! I couldn’t believe it! I could see everything including Pope Francis riding around in his Popemobile! It was a wonderful Mass. Everything was so well organised for such a huge crowd. What a wonderful experience! How blessed was I?

On Monday 26th August I decided to go and see the movie ‘Pope Francis a Man of His Word’. Well, if I thought Pope Francis was good before, I thought he was brilliant after the movie! Everyone should see this movie. I believe it will be made into a DVD by Christmas time this year. It’s well worth getting.