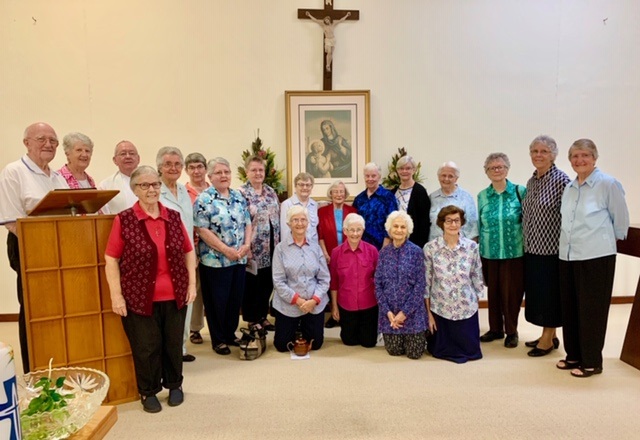 The Sisters of Mercy have made a decision to vacate Loreto Convent at 38 Agnes Street, Rockhampton which was built in 1968 for the purpose of providing accommodation for retired Sisters. This property adjoins the former St Anne’s Novitiate at 40 Agnes Street which was sold in 1999 and is now a private residence. Here is an account of the decommissioning ceremony of the chapel which was held on 11 June 2020.

A reflection about the chapel and its place in the lives of the Sisters of Mercy.

Together with Frs Bryan Hanifin and Frank Gilbert,  Sisters gathered to say ‘good-bye’ and to decommission the chapel on the site of the former novitiate at 40 Agnes Street, Rockhampton, a sacred place, central to the lives of many Sisters of Mercy. From this centre, young Sisters have moved out to various local communities or aged Sisters have sought respite and refreshment from many years of being ‘on mission’.

The first St Anne’s Novitiate, which the Sisters of Mercy purchased from the Diocese in 1937, was the large white building opposite St Joseph’s Cathedral. With an increase in vocations, mainly from Ireland, the novitiate at the Range Convent became overcrowded so the newly named ‘St Anne’s’ in William Street provided a spacious home to many postulants and novices.

The building at 40 Agnes Street, known as ‘Belmont’, had been purchased from the Harris family in 1924 by Bishop Joseph Shiel. ‘Belmont’ became Bishop Shiel’s home and the home of his successors, Bishops Romuald Hayes and Andrew Tynan. It was Bishop Tynan who recognized that the expansive ‘Belmont’ property would be a suitable area for a Novitiate. Consequently, the property changed hands on 24 October 1949 with the ‘White House’ or St Anne’s, opposite the Cathedral becoming a presbytery once again and St Anne’s Novitiate transferring to 40 Agnes Street.

Familiar to many Sisters, the original chapel was located in a front room on the right-hand side of the main hallway but once again, with an influx of postulants and novices, this space proved to be too small. A search to find the written record of the opening and blessing of the new brick chapel has been unsuccessful but oral tradition says it was 1959. The Range Annual of that year has two references, firstly to a Profession ceremony on 31 May 1959 ‘in the beautiful chapel at St Anne’s Novitiate’. The Sisters professed were Amabile Speranza and the late Irene Tyrrell. Later in the year, on 20th October, in the same Range Annual, there is a description of the yearly St Anne’s Fete and the comment: ‘Those who had not seen the new chapel before were charmed with it – especially the beautiful marble altar’. So from 1959 till the end of 1976, this chapel was central to the lives of more than seventy young women who came to St Anne’s to discern their vocation. Many of the Sisters present were professed in this chapel, fashioned in monastic style with its two rows of choir stalls along the side walls and the highly polished parquetry floor and empty space in the centre.

In the late 1960s when Mother M Fabian Connell was Mother General, she and her council saw the need to provide comfortable accommodation for our aged and retired Sisters. For this purpose, Loreto was built on the novitiate tennis court and spare land, opening on 23 November 1968. The presence of our aged and retired Sisters sharing this sacred space with younger Sisters was a mutually enriching experience. Over the years, Loreto has been home to almost one hundred Sisters and the interior of the chapel was refurbished to cater for their comfort and changing needs.

During the decommissioning ceremony, sacred objects were honoured and reverently carried out in procession by the Sisters. The text from Chapter 3 of Ecclesiates is very real: ‘For everything there is a season and a time for every purpose under heaven’.  It is time for taking leave of this sacred space. Many and varied memories and emotions surfaced for those present – memories to be treasured or maybe commended to God for healing. Above all, the Sisters have gratitude in their hearts for this place of peace and serenity, a place of Divine presence, where endless graces and blessings have been freely given and received. 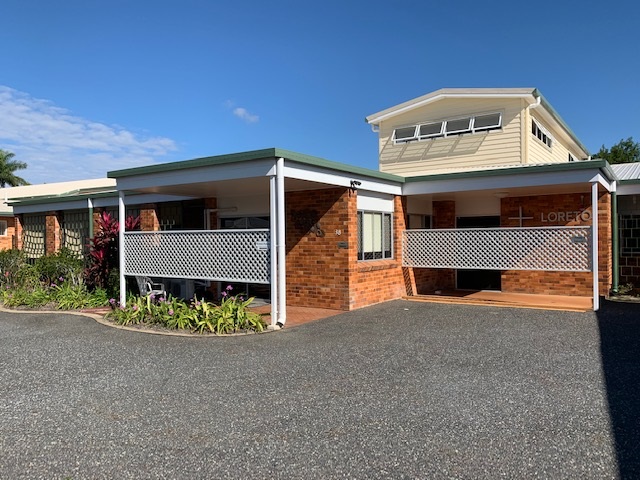