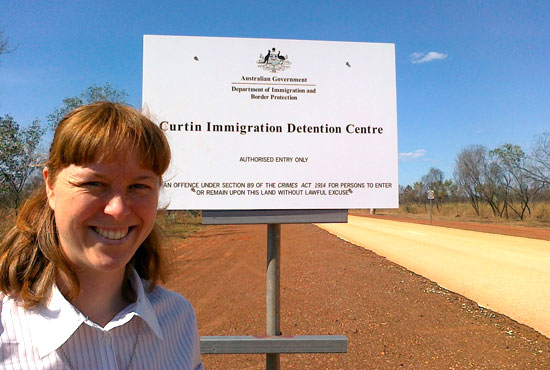 Elizabeth Young RSM during her time as a pastoral worker at Curtin Detention Centre in WA.

Sr Elizabeth Young, who is currently working in the Wilcannia-Forbes Diocese, first met Alex (not his real name) through her pastoral work at Curtin Detention Centre in 2012.

Of Singhalese ethnicity and Catholic religion, he fled his country in fear for his life in the midst of bloodshed during the height of the country’s civil war.

He was 29 years old when he arrived at Christmas Island in March 2009 and was convicted of ‘people smuggling’ in relation to his journey to Australia. After spending time in prison the conviction was overturned by the Court of Appeal in Western Australia in 2012 on the basis that the convicting jury did not properly consider the defence of ‘sudden or extraordinary emergency’.

Since then he has been in a string of mainland detention centres and sent back to Christmas Island twice.

Speaking to Sr Elizabeth by phone in August, Alex spoke of the impact of the constant moving between different detention centres for so long. “Every day they are giving me mental torture,” he said.

Sr Elizabeth met Alex several times in 2012 and again in 2014. Despite being “in a very low state”, he would volunteer to clean the detention centre chapel, conscientiously sweeping it every day.

She reconnected with him when he was in detention in Melbourne in 2018 and was impressed by the way he had focused on his fitness and maintained his resilience.

“But that was two years ago,” she added.

After applying for a Safe Haven Enterprise Visa Alex was recognised as a refugee in 2017, however, in May 2019 Minister Dutton personally refused his application, finding that he failed the ‘character test’.

Alex’s lawyer, Sanmati Verma of Clothier Anderson Immigration Lawyers, said the case highlights the “dangerous trend of the Minister gainsaying and substituting his own opinion for that of a court”.

Sr Elizabeth said on February 27 2020 the Federal Court reversed the Minister’s decision, yet he remains in detention, awaiting a further decision.

It was reported last month that preparations are underway to reopen the high-security immigration detention centre in the northwest corner of Christmas Island as mainland detention centres fill up with criminals whose deportations are on hold due to the pandemic.

The transfer would create space for detainees in eastern states to be transferred to Western Australia to avoid the risks of coronavirus infection in Sydney and Melbourne.

Sr Elizabeth said there were grave fears that Alex would be returned to Christmas Island “any day or any hour”.

She said it would be traumatic for him to return to the island and Alex was worried he would not be able to phone his wife and two children, one of whom he has never met, in Sri Lanka.

“After 11 years, I want to live freely,” he told Sr Elizabeth.

Sr Elizabeth said Alex’s many supporters in the community could vouch for his character and know his compassion and resilience.

“They are shocked at his prolonged detention and call for his release immediately,” she said.

The petition, which now has more than 20,000 signatures, can be found at http://chng.it/4NMpbKFH2P

Watch a short video with Elizabeth