People are NOT for Sale – Call to Help Combat Modern Slavery 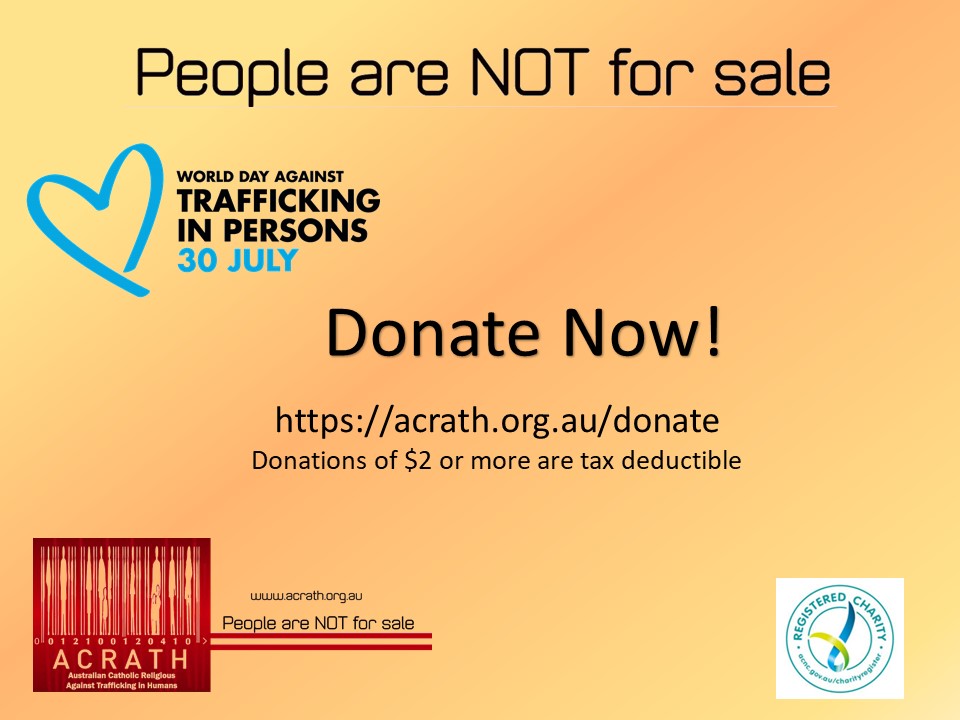 ACRATH (Australian Catholic Religious Against Trafficking in Humans) has launched its national fund-raising appeal today in a bid to raise $400,000 to continue its work fighting human trafficking and modern slavery.

ACRATH now relies entirely on donations after last year losing its $125,000 a year grant from the Federal Government.

ACRATH’s Executive Officer Christine Carolan said the community’s generosity in the past year had ensured ACRATH’s raft of programs to combat modern day slavery and forced marriage had continued.

“In the past year with community donations we have been able to achieve a great deal,” Ms Carolan said. “We have worked closely with the community and government, health, education and civic leaders to bring about systemic change and prevent human trafficking and slavery.”

ACRATH achievements
Donor support has made a huge difference in the past year. Some significant achievements include:

ACRATH President Sr Noelene Simmons sm said there were great challenges ahead for the organisation as long as any person was enslaved.

“We have ACRATH volunteers working across the country, with almost 8000 hours of volunteer time donated, conservatively costed at $240,000. Each of these people work because they believe that People are NOT for sale, and that’s been our tagline for more than a decade,” Sr Noelene said.

“While ACRATH works globally to ensure human trafficking is eliminated, in Australia our focus is on supporting those who have experienced forced labour or who are at risk of, or have experienced, forced marriage, and raising awareness about the possible existence of slavery in the goods we purchase.”

Donations of $2 or more are tax deductible
To find out more about the work of ACRATH go to www.acrath.org.au