Painting of Our Lady of Mercy – Wilcannia-Forbes Collection

Over the past 15 months many significant heritage objects have been relocated to the ISMAPNG Archive and Heritage Centre in Sydney. In April 2020 a large painting arrived in Sydney, having previously hung in the downstairs foyer of St Joseph’s Mount in Bathurst.

The artwork, an image of Our Lady of Mercy, was commissioned by Mother M. Joan Brennan, Congregational Leader (1947-1952 and 1953 – died in office) of the Wilcannia-Forbes Congregation.

Mother Joan had attended the meeting of Superiors of Women’s Religious Orders in Rome in September 1952, the same year she apparently ordered the painting for the new Novitiate, which at that time was being built in Parkes and set to open in 1954. According to information recorded by the Bathurst Archives, whilst at the Novitiate the painting hung above the altar in the chapel but was later moved outside as it was thought to be too heavy to remain in that location. Eventually, the painting was relocated to the Institute of Sisters of Mercy of Australia’s office in Sydney but given its size, it again needed to find a new home. In 2002 it was relocated to St Joseph’s Mount, Bathurst. 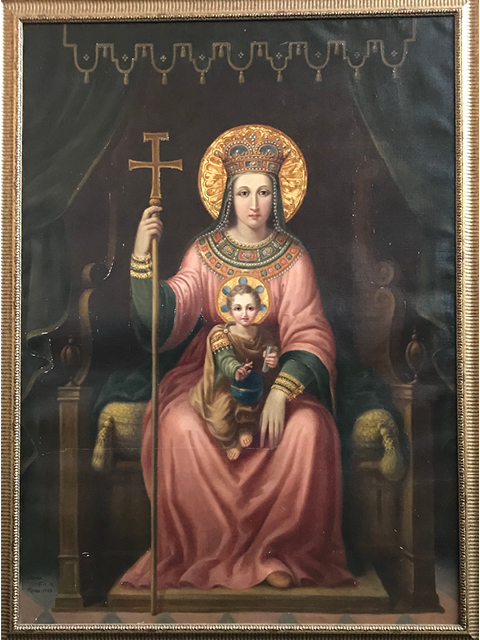 Artwork: Our Lady of Mercy

This painting of Our Lady of Mercy is based upon the work of art in the Basilica of Santa Pudenziana, Rome. His Holiness Leo XIII blessed and sent a copy of the original to Rev. Mother M. Ligouri Keenan at the Mother House of the Sisters of Mercy in Dublin in 1890. A plaque on the frame states, “The Holy Father placed his hand on it, blessed it, and commissioned me to send it to your Convent in his own name, as the image or painting of the entire Order of the Irish Sisters of Mercy”.[1]