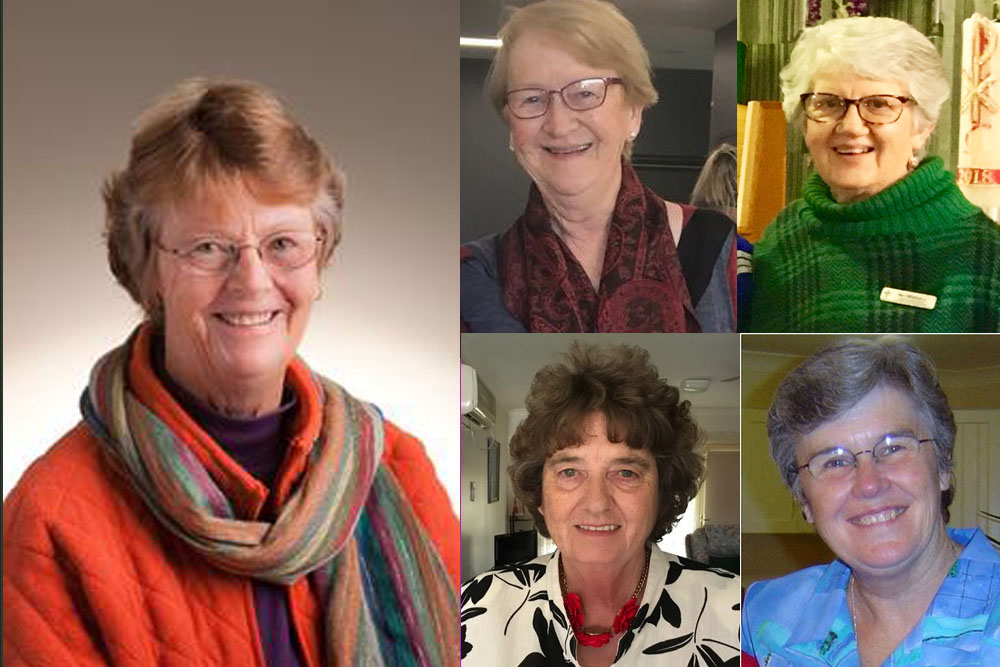 The Institute Leadership Team (ILT) has appointed a new member and four new community leaders, all of whom will commence their new roles in the first quarter of 2019.

Maureen Sexton RSM has been appointed Institute Councillor, in place of Marie Duffy RSM who had to resign from the ILT due to ill health.

The new community leaders, who will commence with a changeover ceremony on the weekend of March 2 and 3 2019, join Moira Tuelson RSM  (South A) and Carolyn Nolan RSM (Central A), who are continuing in their positions.

“Each have given of themselves to be there as our community leaders over the past years. I sincerely thank each and every one of them, knowing these thanks are not nearly enough for the energy, faithfulness and pastoral support they have given to each of us,” she said.

Here is some background information about the new ILT member and Community Leaders.

Maureen Sexton RSM (Institute Councillor)
Maureen currently lives in her home town of Shepparton in rural Victoria, where she has been engaged in a ministry as Pastoral Associate in one of the local Parishes. Living in Shepparton has afforded her valuable time reconnecting with her aging father and family.  In the 47 years since Maureen’s first profession in 1971, she says she has been graced with rich and varied community and ministry opportunities initially as a nurse in Mercy Hospital for Women and Mercy Private Hospital in East Melbourne.

She cites working in Gujrat, Punjab, Pakistan for 10 years, as a real life changing experience which became the bench mark of all that has followed since then.  Further studies in International Development at RMIT in Melbourne and ministry experience in Regina Coeli for Women preceded a ministry of 13 years in the Diocese Daru Kiunga, Western Province PNG as a volunteer with Mercy Works.  Her passion in Kiunga was village health particularly with traditional birth attendants and her time with West Papuan Refugees living in communities along the Fly River.  Maureen appreciated her continuing link with Mercy Works as a member of the Mercy Works Limited Board.

Maureen has been privileged to have several significant periods of time for professional and personal renewal.  She has a varied circle of friends, loves walking the streets and nature tracks of Shepparton and is a family history buff. In commencing her new position, Maureen says, “As I turn 70 I hold all that has been with gratitude and say yes to all that will be in the future”.

Anne Ryan RSM (Community Leader, Central B)
Anne was raised in the western district of Victoria (her parents were dairy farmers). Anne’s primary education was at the local government school and secondary at St Ann’s College now Emmanuel College, Warrnambool.

She says that her ministries have been ‘an exciting pattern of development as the role of women religious has changed’.

Anne started with Primary Education, then Welfare officer in one of our Children’s Homes. This led to Parish Pastoral work over a 12 year period in different parishes, followed by developing and coordinating a women’s spirituality centre in Brunswick Vic, 11 years this time.  Anne was a member of the former Melbourne congregation leadership team then director of Initial Formation for six years.

Since the formation of the Institute, she has been the coordinator of the Candidacy program in Initial Formation and manager of Mercy Spirituality Centre in Toronto New South Wales.

Beverley Whitton RSM (Community Leader, North)
Bev was born in Grafton, New South Wales and grew up on a farm on the outskirts of the  small village of Copmanhurst, on the upper Clarence River. She was the youngest of five – having one brother and three sisters.  Bev received her Primary education  in the small State School prior to attending five years of high school at St Mary’s College in Grafton where she was taught by the Sisters of Mercy. Bev’s first encounter with the Sisters was when they travelled out from Grafton to the small country church to help prepare the children for First Holy Communion.

Bev entered the Sisters of Mercy in Grafton and after her profession in 1964 she then spent many years teaching in the Lismore Diocese before taking up ministry at St Joseph’s Cowper Children’s Home in Grafton. Following an appointment as Principal at the largely Aboriginal school in Bowraville NSW. Bev went on to spend twelve years in PNG, teaching at Mercy College, Yarapos and Maprik High School in the East Sepik Province, along with some initial formation recruitment for the National Women applying to join the Sisters of Mercy.

After study in Chicago and ten years in Pastoral Leadership in the Casino Parish Bev was appointed to formation in Pakistan, returning  to Australia to become Pastoral Care Team Leader for Southern Cross Care, Northern Rivers, NSW. After her retirement from that position Bev has remained actively involved in pastoral care in the parish including offering spirituality to women in remote areas and she has remained involved in visiting aged people especially those suffering from dementia.

Bev has a great zest for life and is nourished daily by her love of quiet times, art, photography, gardening, the outdoors and ‘home’.

Christina Aitken RSM (Community Leader, South B)
Born in Condobolin, New South Wales, Christina is a country woman who ministered for 35 years in rural education as a teacher and later Principal. Christina has been part  of the 100+ years of Mercy tradition in the outback of New South Wales as she stood with families and was actively involved in justice issues with rural women, aboriginal groups and local miners.  During this time she served as the representative for Independent Schools of the Western Area New South Wales on State and Federal government education committees. At her farewell from the Wilcannia Forbes Diocese nine of the Principals present acknowledged that they were on Christina’s staff for the first years of their teaching profession. Counselling studies were also completed at this time. Many warm friendships with teachers, students, and parents established in these years have grown and endured.

For 17.5 of the last 20 years, Christina ministered as a Chaplain in the Maximum Security Correctional Centre for men at Lithgow and the Minimum Security Centre for men at Kirkconnell, also in New South Wales.  Acting as relief Chaplain on a regular basis to Correctional Centres at Bathurst and Oberon she was also seconded to the new Correctional Centre at Wellington for six months. Here Christina was tasked with establishing Chaplaincy Services and setting up a sacred space for worship. Since leaving full time ministry, Christina has continued to be active in community support in Lithgow. Many former inmates and some officers still seek her support. Volunteering to help restructure the Captured Craft Shop at Lithgow Correctional Centre has also proved time consuming but rewarding.  Most important for Christina has been having space to build even stronger connections with the wonderful Mercies in her cluster and to enjoy the company of many friends.

Christina is part of the ecumenical team of New South Wales Disaster Relief Chaplaincy. This challenging role has provided new skills and opportunities to minister in disaster areas.

Christina maintains close and loving relationships with her family. In the footsteps of Catherine and with the help of family and friends, Christina was blessed to care for her blind mother in the last years of her life. With a brother and two sisters in QLD and another brother in NSW family visiting always proved a welcome relief from the chills of winter in the Blue Mountains. Christina has great interest in hearing about the milestones of the children and grandchildren of her siblings. She is especially close to the five daughters of her deceased sister. Now young adults these girls are established and have eight children between them. On occasions over the years Christina has able to assist when new babies arrived or a grandmother was need.

A time of deep blessing and enjoyment at the end of last year was a three month Sabbatical Course in South Carolina.  Titled “Eco Spirituality and the Arts” it fulfilled a deep longing Christina had for a more reflective and creative way of being, with a deeper connection to the cosmos. The new call to Ministry came unexpectedly for Christina and was answered in the affirmative after intensive discernment. She is now looking forward to joining the warmly welcoming and supportive sisters of South B community and journeying with them in Mercy.

Marie Ralph RSM (Community Leader, South C)
Taught by the Sisters of Mercy in Broken Hill, Marie entered the Wilcannia-Forbes Congregation in 1962.   She taught R.E., Maths and Physics at Broken Hill and at the Marist/Mercy College at Forbes where she was Deputy and Year 12 Coordinator. Between these two appointments, for three years she was Principal of the primary school in Condobolin where she was community leader. Her last school role was Chaplain at a Marist school in Adelaide, where she counselled students and their family members and coordinated Liturgies. She is currently Vicar for Consecrated Life in the Archdiocese of Adelaide, where she is also a member of many committees.

As a side-line she conducts Reflection Days and leads Plenary Council sessions.

Her qualifications include a BSc, GradDipEd, MSocSc (Counselling) and MCathEd (Spirituality/Theology). She was a member of four WF Congregation Councils, one as Vicar and one as Congregation Leader. In her spare time, she enjoys socializing with Sisters, family and friends. Marie says that receiving so many emails, cards and phone calls from South C Sisters is helping turn the sadness of leaving South A into the joy of becoming part of the South C community.