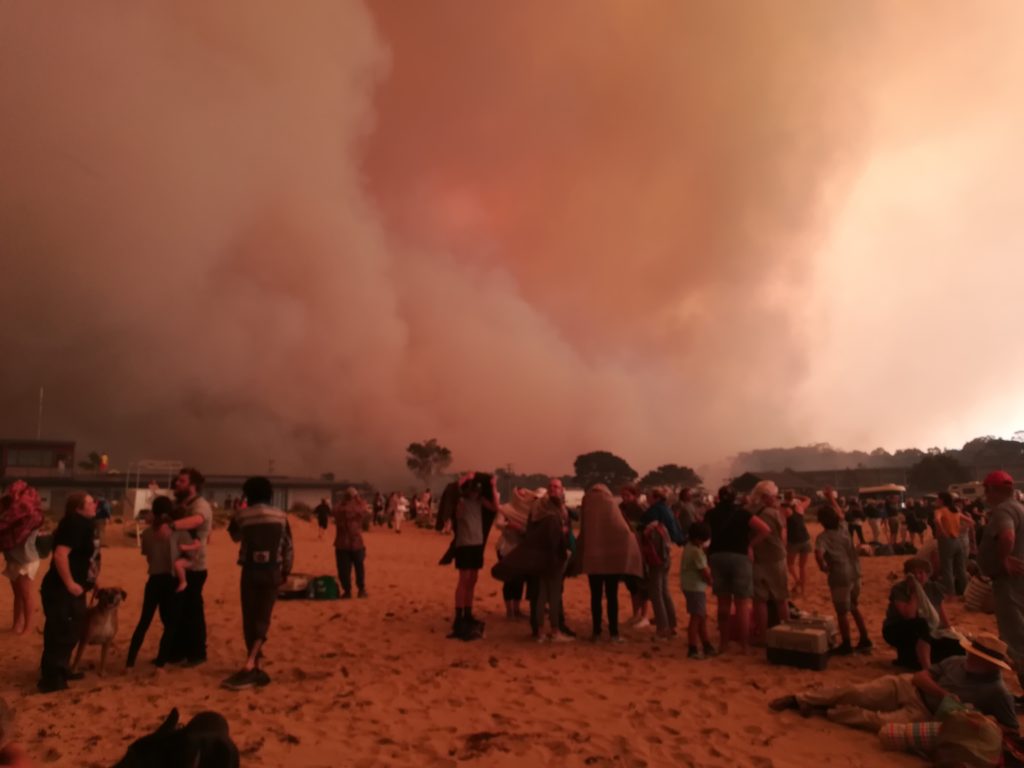 Patricia Powell RSM reflects on the terrifying beauty of the elemental planetary forces unleashing their fury in the Australian landscape at this time. Join us in Cairns for the Laudato Si’ +5 Conference 7-10 June 2020, celebrating 5 years since the launch of Pope Francis’ Encyclical, as we explore new responses for our time.

There is something terrifyingly beautiful about a mighty dust storm rolling in across the countryside from the Western Plains; something awe-inspiring about a raging bushfire cresting the ridge of an escarpment and roaring down into a valley; something extraordinarily powerful about a river swollen by floodwaters, racing downstream sweeping everything before it, breaking its banks and spreading out over the landscape; something spectacularly humbling about an electrical storm as forked lightning rips the sky apart and growling thunder reverberates across the hills; something exhilarating about a cyclone with winds exceeding 100 kms an hour, uprooting trees and reducing structures to rubble; something  overwhelming about an earthquake as the ground heaves and convulses uncontrollably and spews out its molten heart in volcanic eruptions; something  breathtaking about a tsunami as the sea refuses to be contained within its boundaries. There is also something totally destructive about all these natural phenomena.

Wind, water, fire: these are the elemental forces that have been shaping Planet Earth for the last five billion years. These are the elemental forces that we have seen unleash their fury in Australia and the Pacific in recent times. We watch their power unfold, mainly from the perspective of their devastating impact on human life. But the impact of the bushfires on our iconic native animals, domestic livestock and vegetation has also been inescapable this Summer.

The Planet has worked with these forces to create conditions favourable to life. In particular, it has evolved an atmosphere that is breathable for creatures like ourselves, and a temperature-regulating system that maintains a stable overall balance between too hot or too cold for life. In our efforts to dominate and control these elemental forces through our industrial endeavours, we have interfered with both these planetary achievements.

1. We have created a blanket of greenhouse gases that trap warm air on the ground and in the sea, instead of allowing excess heat to be released into outer space.

2.This has caused an increase in the carefully crafted global temperature of Earth by 1 degree Celsius in less than 200 years and we are well on the way towards increasing the Earth’s temperature by two degrees.

Without our cooperation with Mother Nature by cutting back on greenhouse gas emissions, enabling the planet’s  temperature to stabilize or cool down a bit, we are moving into uncharted waters and we do not know if the conditions we are creating will continue to be favourable to life or what the quality of that life would be. This is, by far, the most serious challenge the human species has faced on the planet in the last 7 million years since we emerged. We were not around as a species when the meteorite that took the dinosaurs out 65 million years ago, created a similar critical moment.

In the 1970’s the Sisters of Mercy embraced wholeheartedly the insight that it is not enough to deal with symptoms in our work for Mercy and Justice. It is also critical to consider causes. All the talk at the moment in the wake of the bushfires that continue to ravage the countryside is about compensating the people who have lost loved ones, property and income, and adapting to drought and a longer and more extreme bush fire season. And rightly so. But unless we also look at causes of the bushfires – beyond back burning to reduce the fuel load and cutting down trees, which actually absorb carbon di-oxide – we face a very uncertain future on this planet. And there is no planet B.

It is not rocket science. It is climate science. Today, eighty of Australia’s top academics have written an open letter declaring an “urgent need for deep cuts” to Australia’s greenhouse emissions following the current unprecedented bushfire crisis. They say research has identified what policies and technologies are needed to address the solution, but “what is lacking is the courage to implement them at the required scale.” The letter calls on Australian Governments to “acknowledge the gravity of the threat posed by climate change driven by human activities” and “reduce greenhouse gas emissions in time to safeguard against catastrophe.”  The group includes top academics in fields including economics, healthcare, history and law as well as many different scientific disciplines. Professor Steven Sherwood, climate scientist from NSW University said “It’s a good group to think about all aspects of the problem – it’s not just a science problem. It’s a problem that spans all of those areas.” Adaptation isn’t enough, they say, since the world is still warming and is “only at the beginning of the climate change phenomenon.” (ABC News Michael Barnett)

Reasons given by Governments for not taking stronger action include:

People are already panicking, largely because those with power to act are not acting. If people start taking action into their own hands there could be chaos.

We do not want to align ourselves any further with countries who are contributing to the problem. Rather we need to strengthen our alliances with those countries taking affirmative action. Not only is Australia using accounting off-sets, which do not actually reduce emissions, to meet targets, we are also selling coal to polluting countries, thereby indirectly increasing our contribution to green house gas emissions .

Not as much as we will be affecting the vested interests of Mining Corporations and lobby groups. It is well documented that a move to renewable energy is not only possible for Australia but we could be leading the world in such technologies.

In the larger scheme of things, it can’t be coincidental that right at the point where human industrial activities threaten the future of life as we know it on Planet Earth, knowledge about the functioning of the planet is pressing into human consciousness, giving us the opportunity to correct the dangerous course on which we find ourselves. Whatever sustainable practices and water saving strategies we embrace as we move into a new model for an Institute Environmental Ministry, action for Climate Change must be surely be given priority in our education, spirituality and advocacy programs.