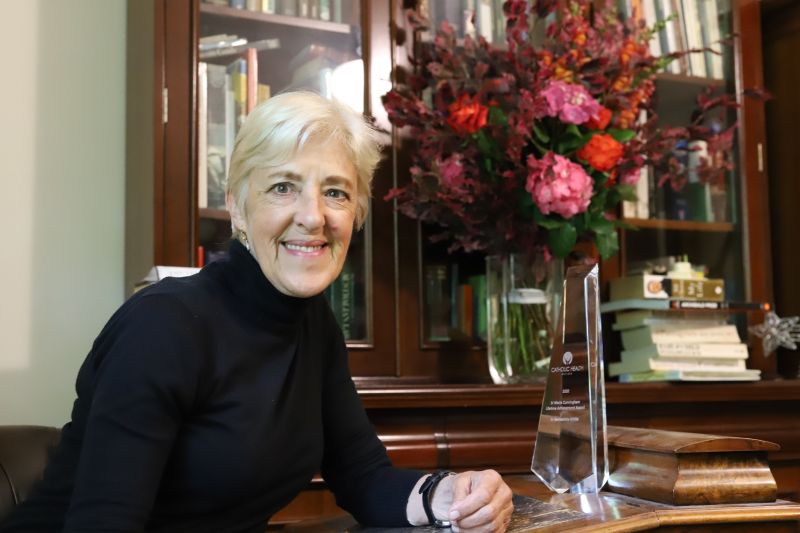 Dr White has been committed to her higher calling as a clinician, educator, supervisor and supporter of advancing women’s health at Mercy Hospital for Women and is considered an
exceptional leader and role model.

“Dr White wholeheartedly deserves this recognition for her incredible contribution stretching back decades,” said Pat Garcia, CEO of Catholic Health Australia.
“During her time with Mercy Health, she approached every day with a mission to provide the very highest care to women under often very difficult circumstances, always remaining calm
and providing care with grace and dignity.

“Dr White’s skills in this very demanding field were second to none.

“Despite being one of the most skilled obstetricians in Australia, colleagues describe her as a‘servant leader’ who never put her ambition ahead of anyone else.

“I am sure there are many hundreds, if not thousands of mothers who will also join me today in saying thank you to Dr White.”

Adjunct Professor Stephen Cornelissen, CEO of Mercy Health, said the impact Dr White had on Mercy Hospital for Women could not be under-estimated. “Dr White was one of our very
first Family Birth Centre consultants at a time when women were seeking more control over their birthing choices.

“Dr White was instrumental in helping us navigate through these changing times and it was no easy feat. She is a passionate women’s advocate and ensured that Mercy Hospital for

Women was not only a place where women felt supported, but that it also attracted some of the most talented young registrars in Australia.

“Under Dr White’s leadership, Mercy Hospital for Women has become a centre of clinical excellence with women driving its future. She was a cherished role model for many and her
influence will continue to be felt for many years.”

Dr White said: ““I was lost for words and in no way prepared to be the recipient of this award. When you go through your career, you do what you think should do and in the end you decide
for yourself whether you think you achieved that or not. But it’s still incredibly nice to have someone else acknowledge your achievements. Thank you very much Catholic Health
Australia for that acknowledgement. It’s very much appreciated and very valued.”

Dr White retired from Mercy Health in 2018 after a 16-year stint as Clinical Director of Obstetrics. Before that she was a dedicated head of the unit.

Dr White continues to actively contribute to Catholic women’s health as a member of the Mercy Health Ethics Committee.

About the award
The Sister Maria Cunningham Lifetime Contribution Award has been bestowed by the CHA Stewardship Board on Catholic health leaders since 2011. The award is given to those who
have made significant contributions to the Church’s presence in health and aged care, and inspired others working in Catholic health and aged care ministries. The award recipients have
enabled the healing love of Jesus to be felt by people in need. The award recipients have led Catholic ministries, but have also made impacts on the broader community.