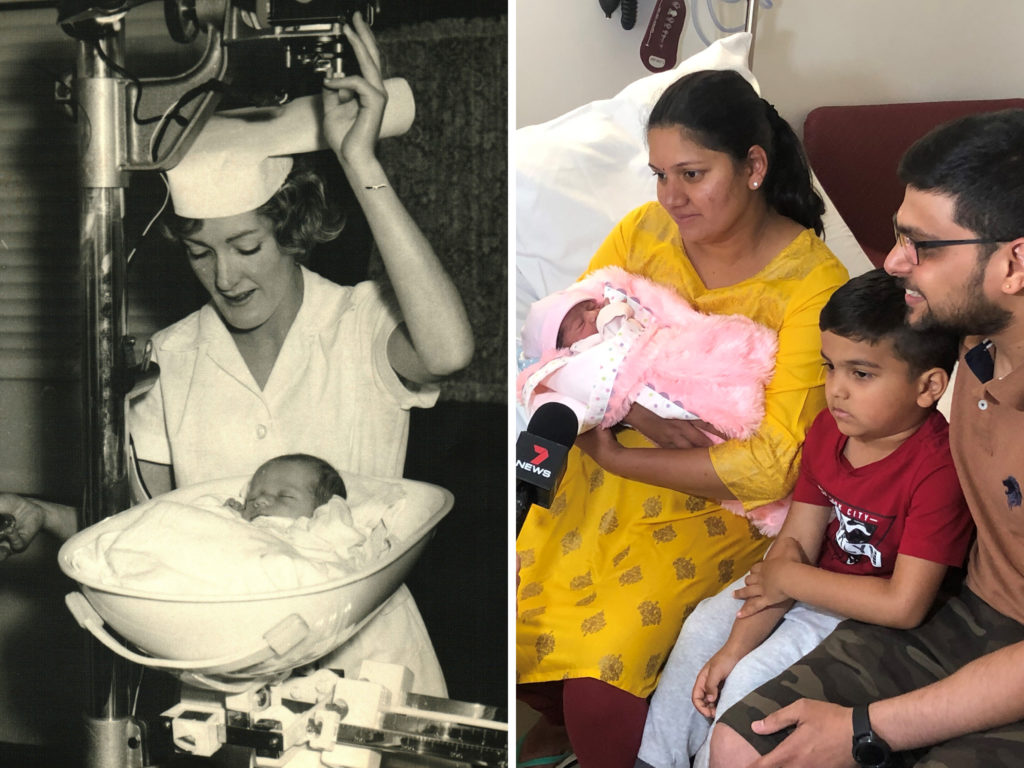 Through the decades! It’s most likely staff at Mercy Health helped deliver Australia’s very first baby for 2020! Mohanapriya and Cibi Chakkravarthy and their son Vihaan welcomed a little daughter and sister, born at just one minute past midnight on New Year’s Day at Mercy Hospital for Women in Melbourne. Just a few hours after the birth, mum and dad and their son Vihaan received a visit from a Channel 7 television news team. The scene was a little different in 1964 when this little person posed for photographers at Mercy Private, East Melbourne, as part of a public fundraiser for Mercy Maternity.

Mercy Health ushered in the New Year and a new decade with a baby girl born to parents Monahapriya and Cibi Chakkravarthy at one minute past midnight on 1 January at Mercy Hospital for Women.

Within half an hour, parents at Werribee Mercy Hospital welcomed their baby to the world. Understandably, with bushfires ravaging so much of our country, these tiny new arrivals made barely a splash on the airwaves. Yet against a canvas of such devastation, it is possibly more important than ever to remind ourselves that new life and new beginnings are always cause for hope.

A century ago, the Sisters of Mercy celebrated a different type of new beginning: the opening of St Benedict’s Hospital in Malvern in 1920. Patients spoke glowingly about the Sisters’ hospitality, the fresh food transported upstairs by service lift and the sounds of “heavenly choirs” (the Sisters singing in the chapel beneath surgery) that revived spirits*. St Benedict’s was to be the first milestone of many in the 100-year-long history of Mercy healthcare. Ours is a history shaped by visionary women who broke new ground in the way we care for people, from the focus on holistic health to the design of the hospitals themselves.

In preparation for our centenary celebrations we have continued to unearth treasures from the Mercy Health files and from further afield in public archives and those of the Sisters of Mercy. We have discovered video footage of Pope John Paul II blessing babies at Mercy Maternity Hospital in 1986 and a 1979 voice recording of Sr Philippa Brazill CBE RSM addressing graduate midwives.

There are stories of personal sacrifice, such as the death of a young Mercy novice who contracted pneumonic influenza while tending patients and succumbed to the disease a day after making her final vows in April 1919. It was the pneumonic plague, which killed more than 50 million people around the world, that propelled the Sisters of Mercy on their mission to provide public healthcare.

There are also stories of fun, frivolity and fundraising, from high society fundraisers with their endless accounts of who wore what (the precursor to modern red carpet events), through to a Miss Mercy Quest. In 1964, a group of nursing Sisters had to count thousands upon thousands of pennies and halfpennies collected by milkmen as part of the Mercy Milk Run fundraising appeal for the new Mercy Maternity Hospital. How they would have marvelled at payWave. Be it opening the new public hospital in East Melbourne in 1971 or Werribee Mercy Hospital further west a quarter century later, the community has stood by our side — and continues to do so today.

All of these fascinating stories and anecdotes offer glimpses of a rich history woven together by the courage and drive of the Sisters of Mercy, whose vision to care for those in need lives on in you, and the work you do, today. Thank you to everyone who has contributed to the past 100 years, those who are actively serving others through their work with Mercy Health today and those yet to embark on a career in care, some of whom, like baby Chakkravarthy, may only just be arriving in this world.

Over the next 12 months, we will be sharing stories of the past century on our new Mercy Health heritage website, on social media and in this newsletter. I encourage you to find out more and to share your own Mercy memories through the website, as we look forward to another magnificent century of Mercy healthcare.