The Sydney Morning Herald recently republished a story from its archives featuring Janet Mead RSM.  It is from April 1974, acknowledging Janet’s wonderful achievement of having the first Australian record to sell more than 1 million copies in America for her version of ‘The Lord’s Prayer’. 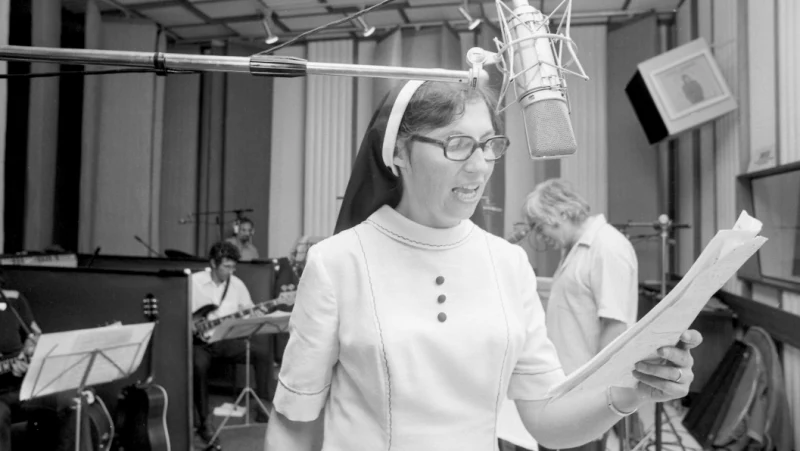 SMH: Sister Janet Mead recording her LP on April 2, 1974. “I can’t believe people would go and buy it just because it’s sung by a nun,” she said of her hit record. CREDIT:RICK STEVENS

From the Archives: Janet Mead, the million-seller nun.

Sister Janet Mead’s “The Lord’s Prayer” was the first Australian record to sell over a million copies in America. The Herald joined the reluctant pop star in the studio.

First published in the Sydney Morning Herald on April 4, 1974

This determinedly cheerful charmer has already trilled her way into the hearts of millions, taking the “The Lord’s Prayer” into the charts. From nine on Tuesday morning, when she arrived in Sydney, Sister Janet has been closeted in the Festival recording studios at Pyrmont. Singing the same 12 songs (mostly religious, two of them her own) over and over again. When the backing variations (up to four for every song) were being recorded and re-recorded, Sister Janet popped into the panelled room next door for a quiet practice.

She cheerfully sang “I tell you, you’ve got everything” and tapped her foot to the rock backing.

“Oh my goodness. I’ m never going to get these words right.” she said, putting one hand on her hip and swaying with the beat of the music.

“I think they’ve had enough religion for one day in there,” she said while musical director Les Sands listened to the recorded tapes.

The 36-year-old nun is in Sydney till Sunday to record an LP which Festival hopes will outdo the astonishing instant success of the “The Lord’s Prayer” record, both in Australia and overseas.

“It is the first Australian record to sell over a million copies in America. And since it was released here last December, “The Lord’s Prayer” has sold over 50,000 copies, which is another golden disc award to Sister Janet.”

There was no fuss and publicity at Festival when Sister Janet recorded “The Lord’s Prayer” — with music composed and arranged by Arnold Strals — last November.

Martin Eldman had just finished producing Abigail’s “Je t’aime” (a rather minor success now, when compared with “The Lord’s Prayer “) when the Catholic Radio and Television Services asked him to listen to a tape of Sister Janet’s rock mass at St Francis Xavier’s Cathedral, Adelaide.

Mr Eldman asked her to come to Sydney. “The Lord’s Prayer” was recorded in one day. One of the singers who backed the record was Kerrie Biddell (she didn’t think it would be a hit.)

This week Sister Janet, wearing her plain beige cotton knee-length dress and brown veil of the Sisters of Mercy order, said she was bewildered by the record’s success.

The record royalties (there have never been so many sold by an Australian in the USA, so nobody quite knows how much she’ll make there, but it is already over $2,000 at five cents a copy in Australia) will go towards the Sisters of Mercy, so there has been no hesitation about making money.

One project she has in mind to help is teaching waifs in Vietnam.

What puzzles Sister Janet is why so many people bought the record.

“Some say it was because people saw the words of the ‘The Lord’s Prayer’ in a new light (that’s what I hope!), while someone sent me a magazine cutting from America suggesting that after seeing ‘The Exorcist.’ people felt so unclean they went out and bought a copy of ‘The Lord’s Prayer’.

“But I can’t believe people would go and buy it just because it’s sung by a nun. I would never go and buy a record just for the singer, anyway, but then the kids do buy David Cassidy’s records because they like him.”

In studio 10, professional musicians (on their best behaviour — no swearing) ran through the numbers until 9 pm with Sister Janet, who is just getting over a nasty virus and all the publicity of being an unexpected pop star.

Sister Janet, with tired rings under her eyes, but still determinedly smiling, related how her “singing career” started several years ago.

“I was constantly involved with teenagers through being a teacher and I came to realise how important rock was to them.

“I decided to use it to bring them together in the name of God with the introduction of rock Masses to the cathedral.

“The Masses were so successful and so many people asked us for the music (Sister Janet has written her own Mass) for their own youth Masses that it got beyond us.

“We thought the best thing to do was make a recording of our own original stuff and get it published, so that it would br available.”

The result was “The Lord’s Prayer.” Sister Janet was a little embarrassed to find herself a reluctant pop star when she arrived back after a two-month tour of England and Europe, spent looking at developments in drama and rock music as well as liturgical music.

She is taking this week off from teaching at St Aloysius College, where she takes English, drama, religion and singing classes.

She has been a nun since she herself left St Aloysius at 17.

“The reasons for becoming a nun change. Over the years you renew your dedication. I originally became a nun because I saw that their work was to help people who had a need.” she said.

Sister Janet is still helping. Besides teaching, the Sisters of Mercy (there are 38 at the Angus Street convent) care for the homeless and those in need, particularly young people.

The publicity attached to a singing nun has been she said almost crossly, “a nuisance.” It kept her from doing all the things she wanted to — youth work, teaching, reading (now mainly liturgy).

There have been offers (all declined) to do both stage and concert work, but Sister Janet does have her own weekly radio show “rock’n’religion.” she said in Adelaide.

The band did a quick run through of “I tell you,” and Sister Janet returned quickly to Studio 10. She looked like being there until Saturday night.