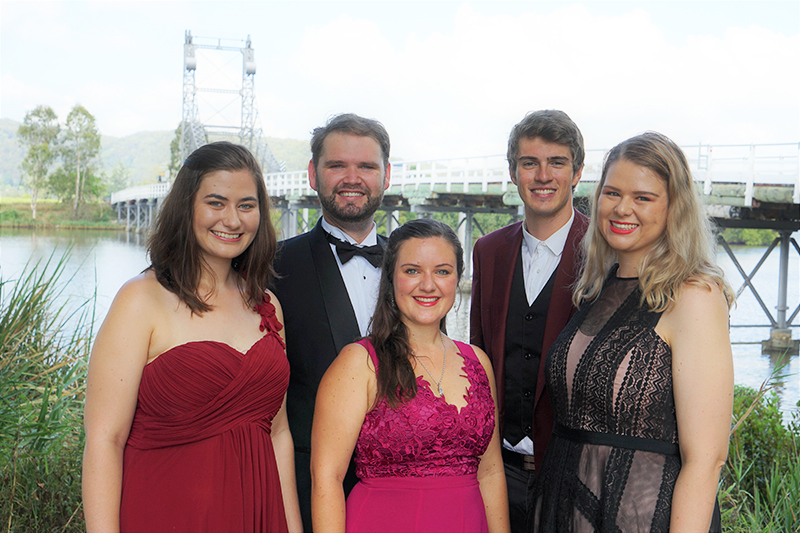 Five former Maclean Music Academy Students have reunited to discuss their upcoming concerts and reflect on the ‘very special music foundation’ they received at the Academy.

In the middle of the year, students Michelle Ryan, Troy Castle, Emma and Madeleine Short and Connor Willmore will be performing classical music concerts in both Yamba and Maclean.

These five talented performers studied music at the Maclean Music Academy, providing them with the foundations for their musical prowess.

“After I finished my studies, I held my very first Opera concert in 2014 –before leaving for Europe the following year,” Michelle said.

“Troy Castle was also a part of this first concert.

“Troy, Emma and Madeleine have all been undertaking their tertiary studies at the School of Music at the University of Queensland.

“Connor Willmore, who has been very (musically) active within the Clarence Valley community, will be starting his first year of studies this year, at the same school (as the others) in Brisbane,” she said.

Michelle said that the group all feel that they have received a very special music foundation at the Maclean Music Academy.

“Overall, we were able to experience the real joy that music brings as well as being able to share it, with the community.”

Michelle said that Anne Gallagher RSM, Gwen Berman and Connie De Dassel’s dedication to (both) music and the community, has inspired the singers to continue bringing concerts to the community, in between their studies and performing around Australia.

The Maclean Music Academy carries on a more than 130 year old tradition of music tuition by the Sisters of Mercy in Grafton. When the Sisters of Mercy came from England to Grafton in 1884, a bishop from Armidale specifically requested for them to teach music and art. Anne Gallagher RSM has been Principal and teacher at the Academy since 1984. Each year hundreds of students study at the Academy.

Based on a story that appeared in the https://www.clarencevalleynews.com.au/former-academy-students-reunite/