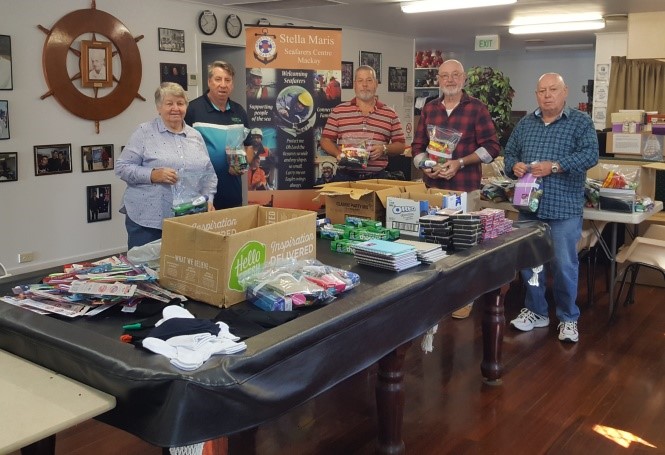 Denise Hinton RSM with some of the other volunteers preparing the Care Welfare Packs for seafarers.

Stella Maris Seafarers Centre in Mackay is the Catholic Church’s missionary work to seafarers whether they are on merchant or coal ships berthing at the three ports at Mackay Harbour, Dalrymple Bay and Hay Point Coal Terminals about 40kms south of Mackay. The Mackay’s Stella Maris Seafarers Centre has been caring for the spiritual, social and material welfare of all seafarers without distinction of colour, race or creed since it was built in 1995.

I have been a volunteer at Stella Maris Mackay for the past five years.  I go each Thursday and I take care of the souvenir shop which is there for the seafarers to purchase t-Shirts, caps, and Australian souvenirs etc. It is wonderful to see the men talking on Facetime with their families and asking the children what toy they would like. When the buses bring the seafarers in for some well-earned R&R they bring them to the centre and I enjoy interacting with them.

Some have been at sea for more than four months.  Many are from the Philippines and when I tell them I have been to their country – (in 1991 on an Exposure Trip before Resettling Refugees in Mackay from 1992-2003), their faces light up and many a seafarer has had a photo taken with me. On a couple of occasions I have been asked to go to the Mater Hospital to be with a seafarer who may have received bad health news. One who had a terminal illness was flown home to the Philippines and I was able to keep in touch via Messenger for about 18 months before he was called home to his God.

On the back deck there is a space where the seafarers love to write the name of their ship and their name.  It is often a place where you can sit and have a coffee or a chat with them especially if they are waiting to board a plane to go back home or if they have arrived and are waiting for the bus to go to the Ports or if they are have been in for a medical appointment. 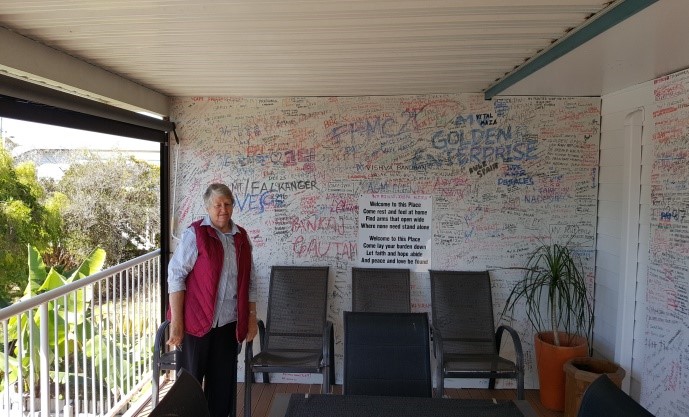 Denise Hinton RSM, on the back deck in front of where the seafarers can write their name and the name of their ship.

The centre is set up with free Wi-Fi for seafarers to contact families and loved ones while they are ashore; they have a pool table, book exchange, a souvenir shop, prepaid phone cards and recharge cards as well as money exchange facilities, a bar, TV and second-hand clothes store. The centre also facilitates hospital visits for any who have taken ill and are hospitalised.   One of our Priests is the Chaplain to the centre and has been asked to provide pastoral care and support to crew if there has been a death while at sea.  Last year a Priest, Centre Manager and Counsellor from Centacare were flown out on a helicopter to where the ships are anchored off the Coal terminals to celebrate Mass for the Filipino Crew who had lost a fellow crew member not far out of Mackay.

Like most of the world, the Centre Manager, Peter Cahill, had to close the doors of the ministry on 20th March 2020 due to the COVID-19 pandemic. For seafarers worldwide, this situation was devastating and has taken a real mental toll. There are over 100,000 seafarers worldwide that don’t have a contract. Their contracts are expired, but they are still working on their ships because they cannot come ashore and so cannot get back to their families. Even if they could come ashore, they can’t fly home.

The good news is that since restrictions have eased and under appropriate conditions, Peter has been able to have some volunteers and the centre drivers come back and start packaging and delivering ‘Crew Welfare Packs’. They have filled these packs with what the seafarers would buy if they came to shore: writing pad and pen, razor, socks, toothbrush, shampoo, a bag of sweets of some descriptions, etc. A very generous donation from BHP/BMA has provided the opportunity for the Care Welfare Packs to be put together.

These packs speak volumes to the seafarers as they know that someone is thinking of them, they are not alone, and they are not forgotten. The efforts of Stella Maris Mackay and its impacts can be seen when you read one of the many recent messages from those who have received their packs:

“On behalf of all the crew on board, I would like to thank Stella Maris for the kind gesture shown by them by sending essential kit for all the 21 crew members on board. Appreciate their efforts for caring about the seafarers in the current difficult situation faced worldwide.”

The Care Welfare Packs are boxed and driven to the ports by our bus drivers and handed to security as there is a no-go zone for close delivery at the moment and the packs are delivered to the ships as they berth to be loaded or unloaded.

I really enjoy my weekly volunteering at Stella Maris Mackay and feel privileged to offer compassion and Mercy hospitality to the many Seafarers who come to the Centre.  May I finish with one of my favourite sayings from Catherine:

“There are things that the poor prize more highly than gold, tho’ they cost the donor nothing; among these are the kind word, the gentle compassionate look, and the patient hearing of their sorrows.”