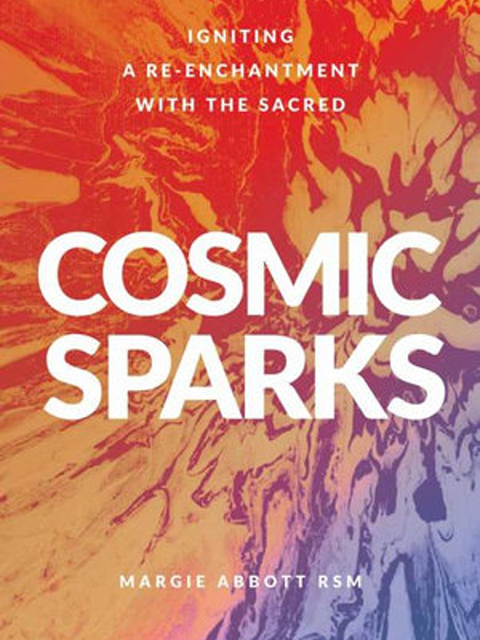 The launch of a book of rituals called ‘Cosmic Sparks’ by Margie Abbott RSM has been conducted via Youtube. As part of the release of the new book, Margie caught up with MIA’s Mercy enews for a Q and A.

You’ve written 3 other books. Why did you write this book?

Since my last published book Sparks of the Cosmos (2001),  I have evolved in my appreciation and understanding of Deep Incarnation, the Universe Story and the writings in sacred ecology by many authors.  When Laudato Si’ first came out in 2015 I was excited about the changed emphasis in a Papal Encyclical – all that is being called sacred; and the interconnectedness of all that is.

I waited for a year and started to search online for rituals that mirrored Laudato Si’ themes in a way that addressed God, and Great Spirit as much more than an “Elsewhere God” – In 2018 after Michael Morwood wrote Prayers for Progressive Christians,  I began writing Cosmic Sparks in earnest. I researched, read widely, attended webinars online, and joined Zoom groups. I was encouraged by Sean McDonagh in 2016 saying to Catholic American audiences that things need to change liturgically in the light of the encyclical. “…start to begin creating prayers and liturgies that support the new engagement and new spirituality and new ethics with creation.” (NCR May 2016)

What do you hope audiences will gain from using it?

Before our books were published Jen Callanan and I began presenting workshops entitled ‘Ecological Conversion’ as described in Laudato Si’ and what it means for celebrating prayer and ritual in schools. We hoped that people would come to see “Ecological Conversion is about falling in love with earth as an inherently valuable, living community in which we participate…” (Elizabeth Johnson Ask the Beasts, 259)

These workshops enlivened our hope that audiences ranging from spiritual seekers, staff in Catholic Schools, families, children, and members of religious orders would benefit by realising that the Pope’s message is directed to all. We are all participants in the Great Work.

Cosmic Sparks is designed to be used by one person or a group, inside and outside with reference on each page to writings that may encourage audiences to read further. The accessibility of Resources such as YouTubes, songs and poems all add to the mix.

You have a particular interest in creating rituals. Why is ritual so important? Why do you create them and share them in this way?

I first wrote a ritual book in 1996. I learnt the power of earth rituals in 1987/88 when I did a placement in a women’s retreat centre in Cohasset MA. By 1990 I was offering rituals in Creation Centred Spirituality Retreats and in 2001 in Sparks of the Cosmos trialled offering rituals on the Four Directions, and Four Elements. By now there were Journals available from the USA that opened up more doors for me…

When I worked for Catholic Education in the Faith Formation Team I was disappointed to discover that many staff meetings started with a quick prayer; with no reference to contemplative silence; or awakening people to Divine Presence, Present– so often imploring “Come Holy Spirit!” as if there was a magical wand that then made Presence active.

You describe yourself as valuing ‘active hope for a healing world’. What does that mean?

I am very influenced by the work of Joanna Macy and her theory that if we can fully feel the pain of the world, work it through, break our hearts, healing can happen.

Whilst carrying the pain of the world, the limitations, the anger, the greed, the lack of action on climate emergency politically, etc. I can stretch my left hand out holding the pain of the world and then stretching out my right hand I hold healing for the world. Both hands come from one body and can be held in faith without contradiction.

To purchase your copy from the publisher, Coventry Press click here.