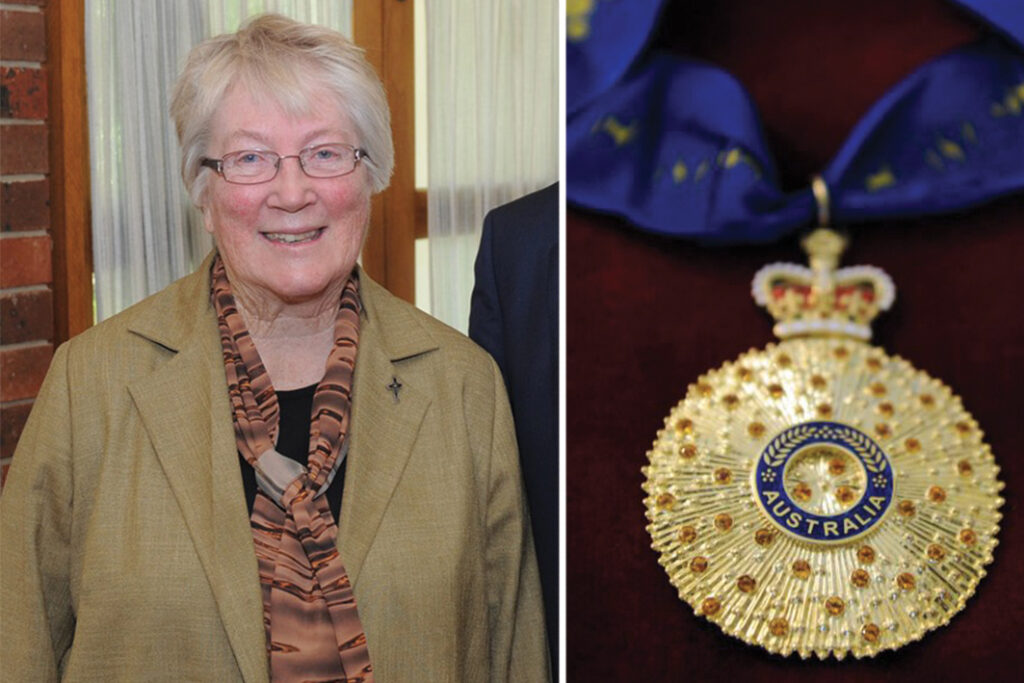 The Institute was thrilled to receive the news that Adelaide Sister,  Kate Conley RSM, has been honoured in this year’s Australian Queen’s Birthday Honours. Kate was one of five Mercy people recognised in this year’s honours.

Kate’s journey began growing up in Snowtown, SA, part of a loving family. Her father, Oz, was the chemist for the region. Her mother, Anne, was involved in the life of the community and the parish there. The four children, Kate, Bill, Moira and Joanne had a very happy childhood. Then as a boarder at Saint Aloysius College in Adelaide, Kate began to explore the idea of becoming a Sister of Mercy, and transferred to the Juniorate at Erindale in her final years of school and during her time at Teachers College. From there she entered the Sisters of Mercy in 1954.

Kate’s life reflects the ideals of Catherine McAuley, Foundress of the Sisters of Mercy, especially the call to minister to women and the poor. Her vibrant, fun loving personality has enabled her to go out to people on the edge of society in love, and establish lasting connections of friendship with them.

Kate entered the Convent at a time when Religious Life was very settled and predictable. The rhythm of life which emphasized the balance between action and contemplation grounded her in the deep spirituality and practical action which have become the hallmarks of her life. As a teacher at St Aloysius College and Parkside, and teaching Principal at Albert Park, Millicent, Mount Gambier and Elizabeth, Kate was already reaching out to families and especially to struggling mothers. Vatican II disturbed the routine of Religious Life as we knew it, and Kate was up to the challenge to search out the places where we were surely called to minister as Sisters of Mercy.

‘Women on the Move’ (a history of the Adelaide Sisters of Mercy) p. 415, talks about one area of ministry that attracted Kate’s attention.

“From 1978, the Inter-Church Trade and Industry Mission (SA) had been inviting the Sisters of Mercy to join the mission as industrial chaplains. With the economic atmosphere of the period and the impact of new technology, people in the work force were under severe strains. There was escalating pressure to perform. There was increasing fear of retrenchment or of company failure as well as personal life problems. Many employees were seriously exploring the spiritual questions of life. Migrant women were in a particularly vulnerable position. At various times, three sisters responded to the challenge of ministering to employees, management and unions.”

Kate was one of these sisters.

‘Women on the Move’ goes on:

“In the mid-1980s, Kate Conley also moved into chaplaincy at the women’s prison. One source of joy for her lay in the ecumenical prayer rituals she conducted regularly at the prison in a way which tapped into the events within the women’s lives, their joys and their sorrows. She felt she received strength and inspiration from her growing relationship with the women and the deeper knowledge of their whole story, which often included great courage. Her prison and her industrial ministries sometimes merged. At Christmas, 1992, for example, Central Linen allowed a worker time off to be Father Christmas at a prison party. Women employees donated some of the gifts. It was a significant outreach, she felt, to people who often find no bridge back into the community.”

It was in the services celebrating deaths and births and other big events in the lives of the women prisoners that Kate said she felt ‘ordained by circumstance’.

. . . .
“In 1992, the Catholic Prison Ministry Committee was established, largely – according to ’SA Catholic’ – through Kate’s driving force. She had made an extensive tour of women’s prisons around Australia during the previous year. Her trip was funded by a grant from the International Church Women’s Fellowship of the Lost Coin, which furthered the development of women, especially women on margins. The tour also led her to plead for a wider introduction of alternative forms of sentencing.”

Kate worked with other chaplains and with the staff at the prison and through these friendships was able to encourage good things to happen. Through her friendships with the women prisoners and their children and families, Kate was able to support them in their highs and lows. And her support is ongoing.

She was involved in forming groups where women could support each other – like a Catholic Single Parents group at Henley Beach in 1978. In 1988 she supported the establishment of Catherine House, a shelter and safe place for women in distress and served as Chairperson and Board Member for many years. In 1990, she helped organize Home Retreats through Sophia Women’s Spirituality Centre. Her Retreat work has continued with many different groups, including staff of our Mercy Schools.

More recently, Kate has spent time at the Refugee Centre at Curtin, and supports other Sisters in ministering to refugees and asylum seekers in our community.

Within the Adelaide Mercies, Kate has been a leader and an influencer. She served on two Provincial Councils and was appointed Novice Mistress for a term, in charge of the formation of young women who joined the Order. When there is a speech to be made, Kate is often the one called on to do it. She can always make us laugh.

When she had a chance to take a ‘sabbatical’ in 1995, she chose to spend the time in a shepherd’s hut in the Barossa Valley, a time when she could be truly contemplative in her little hermitage – focusing on her painting and poetry and immersing herself in nature. It was a time to nourish her soul and prepare her to go back to her work.

Kate is a story-teller, a good friend to many, a community builder – both among the Sisters and among those she worked with. She is a leader, a formator, a connector, an artist, a poet, a contemplative, an activist, a lover of life.

We are so happy that she and her work have been recognised through the awarding of the Medal of the Order of Australia (OAM).