Blessing of the Rivers Ceremony a Powerful Community Gathering 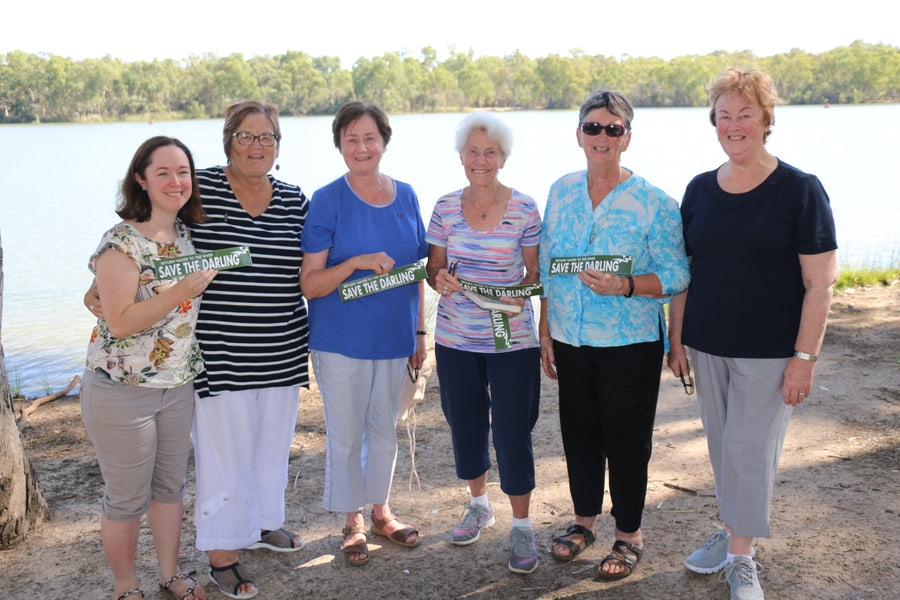 Click on the play button below to watch the Blessing of the Rivers Ceremony:

Water in Australia – a critical concern for Mercy

A large gathering of adults, younger people and children, most with jars or bottles of rain, tap, creek, spring, lake or river water, assembled under the trees at the junction of the Murray and Darling Rivers in Wentworth, New South Wales, on Saturday, 16 February, for the Blessing of the Rivers Ceremony.

The presence of so many people— including Indigenous Elders, Sisters of Mercy, Community Leaders, Parishioners of many denominations and Local Citizens— at this community event, reflected the deep concern shared by the local community and those who had travelled long distances, for the health of Australia’s largest and most diverse river system, the willingness to express this publicly and the desire for action to heal the rivers.

Click here for the Blessing of the Rivers leaflet

Indigenous Elder Uncle Badger Bates from Darling River Wilcannia invited all present to first participate in a smoking ceremony to be cleansed and healed. He then performed the Welcome to Country, thanking those present for gathering ‘because we have a bad crisis’. He spoke of the death of the million fish in January, ‘of hearts being broken, of black people and white people crying for the fish’. He continued ‘We just hope government people will listen to our voices because if they don’t we have no future for our kids and grand kids’.

Shane Howard, musician and one of the initiating group, explained the origin of the event, an idea of Victorian farmer Rob Rowley, and how, knowing that the Sisters of Mercy had a long connection to this part of Australia and a very strong network, asked his sister Adele Howard RSM to spread the word. Her efforts led to involvement by local Sisters of Mercy, Helen Nolen RSM (Mildura resident) and Carmel Setford RSM (Merbein resident) with Deb Bogenhuber (Mildura resident) in the practical organisation on the ground. Subsequently, all faith groups and community groups were contacted and invited to participate.

Those gathered responded to the statement of purpose with a prayer for healing adapted from Laudato Si’, A Prayer for the Earth:

‘All-powerful Creator Spirit
you are present in the whole universe
and in the smallest of your creatures.
You embrace with your tenderness all that exists.
Pour out upon us the power of your love,
that we may protect life and beauty.
Help us to better protect the waters of these once mighty rivers which are the life-giving source for this land and its peoples, for the myriad fish, the birds of the air,
the animals that drink from their waters and the food that is grown from the nourishment of the soils of the country they traverse

Fill us with courage and peace, that we may live
as brothers and sisters, harming no one,
Help us to identify with the abandoned and forgotten of this earth, so precious in your eyes
Bring healing to our lives and our environment,
that we may protect the world and not prey on it,
that we may sow beauty, not pollution and destruction.’

The Ritual Blessing and Pouring of Waters from containers gathered, posted or carried to the site from all over Australia followed the singing of ‘Heart of My Country‘, performed by Shane Howard accompanied by Chris Rogers, musician and sound technician. It posed the question:
‘Does anybody make decisions of conscience anymore?’ (lyrics)

The line up to pour water and express solidarity through symbolic action was most moving, with each place where the water was sourced named before the water was poured. Water from Mercy communities in many parts of Australia was poured first, including from the Institute Centre at Stanmore (New South Wales), Southern Administration Centre and Mercy Hub (Victoria) Mercy College and Mercy Convent at Coburg (Victoria), the Ballarat and Geelong regions (Victoria), Mercy Creek Seville in Cairns (Queensland) and Community South A (Western Australia).

People from various faith traditions and groups then led us in prayers they composed. All responded ‘Hear our prayer for justice and healing in our land’.

Local musician Tony Smith, accompanied by Chris on guitar and Mel on violin sang ‘Darling River Man’, his story of growing up on the Darling River.

Adele Howard RSM, who prepared the ritual and was MC for the event, then invited all present to to stand and extend a hand in the direction of the river as a sign and statement of commitment to change, calling all Australians to a new awareness of the importance of respect ‘for our rivers, our water-ways and the teeming life within and around them’.

The Final prayer of Blessing gave thanks for the life and beauty of the environment, for each other and ‘for the support and prayer and call to action from thousands of people across Australia who have responded to this invitation…and those who are with us in spirit across the land.’

The final song ‘Wild rivers’ gave the last word to the ‘wild, wild rivers on our way to the sea’.

It was a day of community and solidarity, of prayer and purpose, of hope and witness, of the desire for healing and the need for action.

With thanks to Anne Walsh for her photos and story (featured above) from the Mercyworld.org web site for MIA (from the focus area of concern of degradation of the earth).

On Monday, 18 February, The Guardian newspaper online reported that a scientific panel investigating the causes of three mass fish deaths at the Menindee lakes attribute the mass fish kill to over-extraction of water and drought. Read the article here