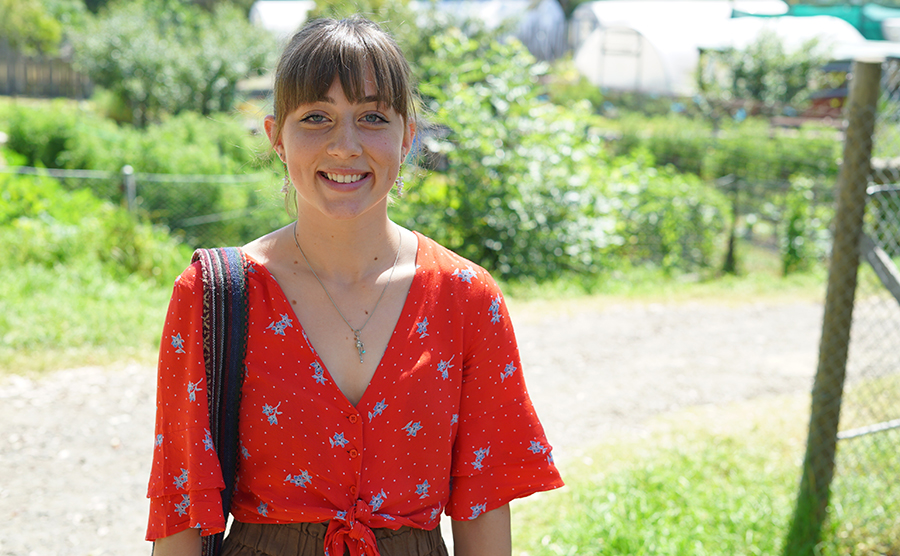 Christa Hubik, Vice-captain of the Academy of Mary Immaculate in Fitzroy

17-year-old Christa Hubik is vice-captain of the Academy of Mary Immaculate in Fitzroy and a strong advocate for protecting our environment.

“I’ve always felt a strong connection to nature. My mum has been a horticulturalist for almost 20 years – I’ve always grown up with an incredible garden at home and an appreciation for all living things.”

At the end of her Year 9 in 2016, Christa wrote a pitch to her Principal, Mary Moloney RSM with two other students at the Academy to create a student group focused on protecting our planet.

Earth at Academy was launched in 2017 and currently has around 30 student members.

“Our motto for Earth at Academy is the quote from Robert Swan: ‘The greatest threat to our planet is the belief that someone else will save it.’”

There have been ‘green’ groups at the Academy in the past, “but they never really took off,” Christa explains.

“I think the difference with Earth at Academy is we hit it at a really good time. The ABC’s War on Waste was on mainstream television, the media were discussing the plastic bag ban – sustainability was on everybody’s minds so were able to get good leverage from that.”

Examples of the work the group have done include: Earth at Academy Hour, where for one hour per term, all lights, heating and air conditioning are turned off across the campus to save electricity. They’ve also created Academy branded reusable coffee cups and water bottles which are sold to staff, students and families. The profits have been used to buy a worm farm for the school.

“We’ve also installed recycling bins and scrap paper boxes in classrooms across the school,” Christa adds. “This was a great achievement for Earth at Academy and the Academy!”

Last year, Christa started the Instagram account, @174metres. With the help of her rubber duck, Wanda, Christa collects rubbish she finds over the 174 metres between her house and the tram stop, takes a photo of what she collects and shares it to Instagram. “I want to show people how much litter just one person can find in a short distance and then think about the impact this is having on the entire planet. We can do better than this!”

Christa attended the School Strike 4 Climate Action in November last year at Parliament House with some of her schoolmates. “It was an amazing feeling to speak up with other youth who feel passionately about the environment! We are constituents of this country and we don’t feel listened to or respected by our politicians. Our Prime Minister Scott Morrison says we need less activism in schools. It’s unfair to discount our opinions simply because of our age. We can see the damage that is being done to our Earth and we need urgent climate change action from our political leaders.”

This year, Christa would love to introduce a soft plastics recycling program at her school, as students go through so much GLAD Wrap, muesli bar wrappers and other soft plastics in their lunches that are currently going to landfill.

“I feel privileged to be in a position where I can be a voice on this topic. I am passionate about our planet’s future and I feel I have an obligation to lift up the people whose voices might be lost.”