A Life of Drama 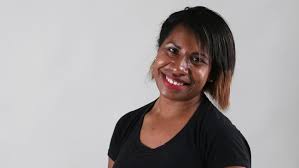 Wendy P Mocke is a Papua New Guinean graduate from the National Institute of Dramatic Art (NIDA), in Sydney Australia. In a recent interview appearing in ‘Paradise’, Air Niugini’s inflight magazine (October 2018), Wendy spoke about her upbringing and credits the Sisters of Mercy as being instrumental in opening doors for her.

“When I was eight years old, I said to my father: ‘Dad, when I grow up, I want to be an artist’. My father looked at me perplexed and said: ‘So you want to be poor all your life’?”

“Like many PNG parents, he equated success with a law or business degree, which would grant you financial freedom”, says Wendy P Mocke.

“My father however, being careful not to crush his eight –year-old daughter’s dream, followed that response with a smile. I think he always knew I would end up in the arts. “

Mocke’s acting career started at Madang International School at the age of six, and she was involved in every school stage production every year until she left at 12.

From there it was to Mount Saint Bernard’s College in Herberton, far North Queensland.

“My parents worked extremely hard to provide me with the opportunity of being educated in Australia but the Sisters of Mercy were instrumental in also supporting me and opening doors that I would not have had access to otherwise,” Mocke says.

Born in Port Moresby, Mocke and the family moved to Madang when she was three. They still run the family owned trade store, Yogo Trading.

“I grew up with eight siblings who were all extremely outgoing and talented in sports,” Mocke says. “I was not as athletically inclined and had a very small circle of friends, as I did not feel as confident in large social settings. I found acting was a way I could express myself and be my own person.”

Firstly, she found out about the National Institute of Dramatic Art (NIDA) and watched Radiance, an Australian independent film, about three Aboriginal sisters who reunite for their mother’s funeral.

“As a 12-year-old, I could not really articulate the impact it had on me, watching a young vibrant Deborah Mailman light up the screen alongside Rachael Maza and Trisha Morton-Thomas who gave outstanding performances in this beautiful, heart-tugging artwork.”

Eighteen years later she used one of the monologues from the original stage play as an audition piece for NIDA.

“It ended up being my strongest piece, which led to my acceptance into NIDA,” Mocke says.

“I love the rawness of the theatre, the electricity in the atmosphere and the demand theatre expects of performers to establish a connection with the audience.

“I love the subtle nuances of screen acting, and the endless possibilities the film world has to offer. Human beings and their stories intrigue me; the idea of wearing someone else’s skin and to exist within the complexities of their flesh fascinates me.”

She describes the three years at NIDA as grueling.

“NIDA lives up to its reputation of hard work. You’re doing long hours, from 8am until about 11pm, Monday to Saturday. You virtually have no other life. It demands excellence, it demands discipline and that’s why it has the reputation it has.”

Mocke’s favourite actors are those who are also involved with writing, directing or producing, particularly actors, she says, whose work resists negative stereotypes often associated with people of colour.

It’s been a busy year so far, since graduating in 2017. Earlier this year, Mocke performed in an independent theatre show called Home Invasion at the Old 505 Theatre in Sydney.

She is completing a writing residency with Jute Theater Company in Cairns and has written a PNG stage play called I am Kengu. Set in Simbu village, in the highlands of PNG, it explores cultural identity and expectations.

Mocke has just been awarded a grant from the Sydney-based Seaborn, Broughton & Walford Foundation to cover the costs of the play’s creative development, and she is hoping its opening performance will be in Port Moresby next year.

While Port Moresby has its own theatre group, the performing arts (in PNG) are regarded as Western concept, Mocke says, even though story-telling is a critical part of PNG’s oral culture.

“Port Moresby theatre is alive but not anywhere near as where it could potentially be.”

“I am Kengu will have an all-PNG cast,” she says.

Mocke has also launched a company called Melanin Haus which she hopes will be a cultural hub for PNG, Pacific artists and other indigenous artists, doing stage productions, screen productions, web series, performance art and workshops.

In August, she was an artist in residency at the University of Sydney, working on a theatre piece called Voices of West Papua. And she has just finished performing in Moby Dick at Sydney’s Seymour Centre.

“But my most important job of all is being mum to my wonderful eight-year-old daughter who is always keeping me in check and is a constant source of inspiration for me,” Mocke says.