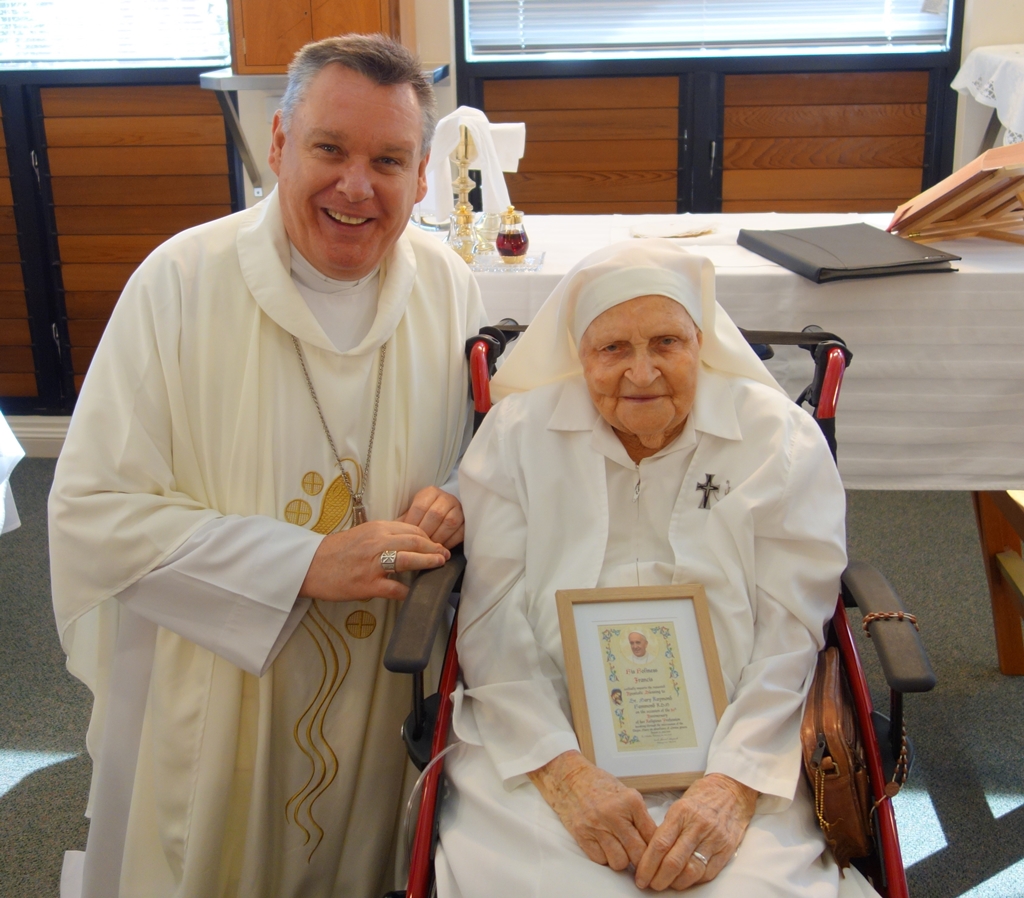 Bishop Tim with Mary Raymond Hammond RSM on her 80th Jubilee of Religious Profession on 22 August 2019 in Townsville.

On August 22nd, Sisters, family and friends joined the residents and staff of Loreto Nursing Home to mark the 80th Jubilee of Sr Mary Raymond Hammond’s vowed religious life as a Sister of Mercy in Townsville.

Symbolised by oak this anniversary has the same strength and longevity, but rooted in true love.  Like an oak tree strong of trunk with branches resembling, in this instance, growth in the Mercy vowed life and acorns continuing new growth. The celebrations began with a Mass celebrated in the Loreto Nursing Home Chapel with Bishop Timothy Harris as the Presider. Sister Bev Whitton, Northern Community Leader and Gaye Lennon RSM, Institute Councillor, were also present. During the Mass Sister Bev Whitton presented Sister Mary Raymond with a Jubilee candle. The Sisters of Mercy present joined Sister in Renewing their Vows.  At the end of the Mass Bishop Tim Harris presented Sister Mary Raymond with a framed Papal Blessing. 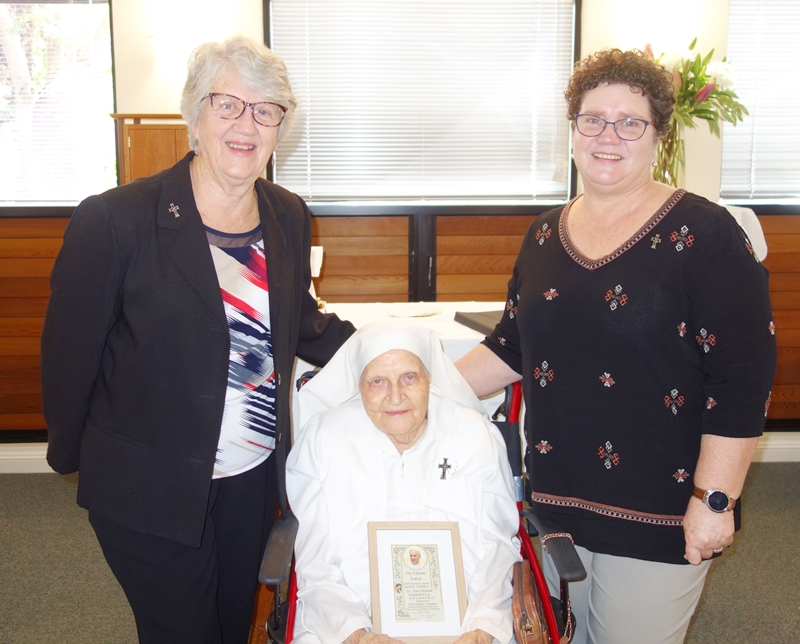 Bishop Tim in his homily said:

“Sister Mary Raymond has within her a burning desire to do God’s will and by extension a passion to ensure others do his will as well. She sees herself as truly blessed by God – she deeply appreciates the care and concern of the religious in her community, and the shared love of her family and friends. Further she is thankful that she is able to live out her remaining days in the care and companionship of the residents and staff here at Loreto.

I must say that 80 years of Religious profession borders on a miracle. It’s so counter cultural today and probably has always been.  Here we have a woman totally committed to the cause and that cause inspired by Catherine McAuley has captivated Sister Mary Raymond for a very, very long time and what’s more she has been faithful to it.

Through God’s grace and the prayers of Catherine McAuley you have remained unwavering in your love of Jesus no matter the challenges and hardships you have endured. In a day and age where longevity and commitment is in short supply, you exemplify what it is to remain steadfast in the Lord’s love.” 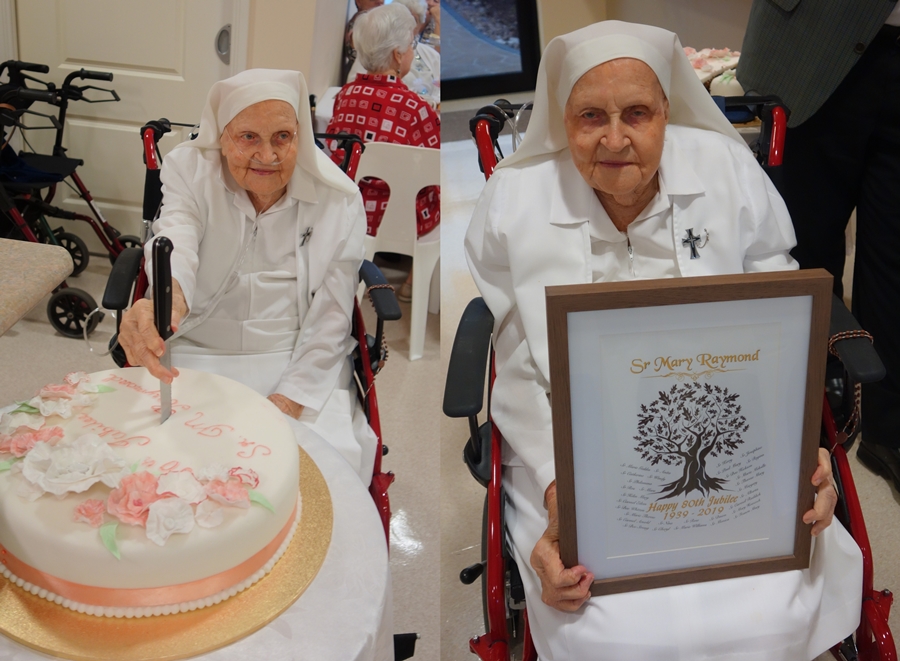 Sister Mary Raymond in preparing for this celebration three or four years ago chose the readings we are using today. Both speak of love and in the sentiments of the Gospel in particular, Jesus according to John seems to be saying “fruit fairly bursts open as a veritable flood in the exercise of love”. Sister Mary Raymond has always wanted to be fruitful.

Sister  Mary  Raymond ,Marion, born on October 31st, 1921, was the fifth of eleven children born to Mary and Harold Hammond. It was in this devout and prominent Catholic family from West End that Sister M. Raymond’s faith was first nurtured. She grew up surrounded by a love enriched by the lively interaction of her siblings and a talented musical environment.

From an early age Sr. Raymond was convinced that God meant her to be a religious and influenced by the example of the pioneer Sisters who taught her first at St. Mary’s and then at St. Patrick’s  College she entered  St. Patrick’s Convent, The Strand on February 2nd 1937, shortly after her fifteenth birthday.

As a young Sister she experienced the dislocation caused by the Second World War when the Sisters’ residence at The Strand was taken over by the armed forces and the Sisters were evacuated to the west. Together with other young sisters her initial formation as a Sister was continued in Hughenden and Winton. Here generous lay people had opened the doors of their own residences to provide accommodation for the sisters where all shared in the deprivations caused by military action and the normal inconveniences of life. There are however a host of stories which illustrate the laughter and good humour which characterised the intimate sharing of lives.  During this time history was made when Sister  Mary Raymond, Sister  Therese Mary and Sister  Mary De Lourdes made their Final Profession of Vows in St. Patrick’s  Church  Winton – the first time such a ceremony had been held outside the Convent Chapel at The Strand.

Her initial ministry was Teaching which she loved. Depending on the need in the particular parish she taught both primary and secondary classes.  As was the case in those days she completed her teacher education within the pupil -teacher system where young teachers were tutored and supervised in the classroom by designated senior teachers and received their certificate of qualification after the required final examinations.  Because of her gifts in music after her teaching day was over she took music  lessons which was an important source of financial support for the sisters. She took her turn at domestic duties and at supervising boarders. As one of the junior sisters she was often given the role of Sacristan, that is, taking responsibility for the cleaning of the church or the chapel and preparing it for liturgical celebrations. This role was one she cherished and regarded as a privilege.

Unfortunately, after twenty years she experienced serious health problems necessitating major surgeries in Sydney after which she was not able to resume classroom teaching. She was however still able to continue taking music pupils which she did until her retirement. She was asked to supervise the St. Patrick’s College Library and during this time she carefully collected every edition of the Townsville Catholic News and paid for them to be bound. This became and remains a very Valuable resource to the Congregation and indeed to the Townsville Diocese and anyone seeking information about that particular period of time.

In 1984 she was part of a group of twenty retired Sisters who agreed to form a community at Villa Vincent Nursing Home which at that time still belonged to the local Sisters of Mercy. In these beautiful surroundings the Sisters were able to find more time for prayer and quiet. It really began a whole new experience, living with the other residents and being a great source of encouragement and support to them. Here Sister Mary Raymond began what she describes as “ the happiest and most fulfilling time of her religious life.” She enthusiastically began to gather people around her to pray for all manner of causes including vocations to the priesthood and religious life. Always deeply devoted to the Eucharistic Celebration and Presence she encouraged this in others. After the daily Mass she would be in the chapel praying and chatting for ages with anyone who expressed the need.

In 2002 when the Sisters sold Villa Vincent to OZCARE Sr. M. Raymond chose to remain at the Nursing Home. She had established a ministry of prayer and support for the residents whom she had grown to love and was particularly concerned for those who had no family or visitors, and those living with dementia. She had a beautiful little garden which she tended herself and an orchid or rose would often appear on a bedside table to cheer the life of someone who needed a ray of brightness in his or her life that particular day. She was often to be found quietly praying at the side of the resident who was dying and became a loving support to any family who was keeping vigil beside a loved one. Unfortunately, a deteriorating heart condition and a subsequent Stroke in 2013 resulted in her taking up residence in Loreto.

Now in her 98th year she continues to reside in Loreto, where despite her age and frail health, she does her best to keep abreast of all that is happening in the world using her laptop. Whilst her major apostolate is prayer, her door, her ear and her heart is open in mercy ministry to anyone who comes seeking a word of wisdom, comfort and kindness. Sister Mary Raymond wanted the focus of the Celebrations to be thanksgiving for God’s faithful and loving care experienced during her lifetime  through her family and friends and especially through the Sisters in her community. She is passionate about spreading the message of God’s loving mercy and rejoices in the ever widening circle of people who join the Sisters in this ministry throughout the world as Associates. She is thankful that she is able to live out her remaining days in the care and companionship of the residents and staff at Loreto where she experiences  the very best of love and support.

On the occasion of Sister’s Platinum Jubilee her niece, Good Samaritan Sister, Marion Firth gave the vote of thanks on Sister’s behalf. In her closing remarks Marion said “we pray that in the time ahead( and we are not expecting to be here for your 80th- but who knows?) you will be given the physical strength and mental ability to continue your ministry of mercy until the book in which God is writing God’s story through your life, is closed.” Well Sr. M. Raymond we have rejoiced and given thanks for your Eightieth, Oak, Anniversary. May God go gently with you into the future. 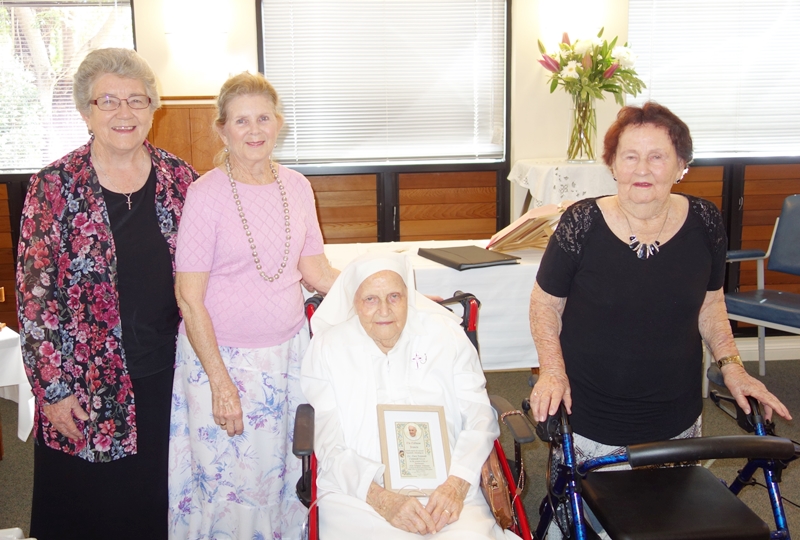 Sr Mary Raymond (seated) with nieces Marion and Annette on the left and her sister, Margaret  on the right. 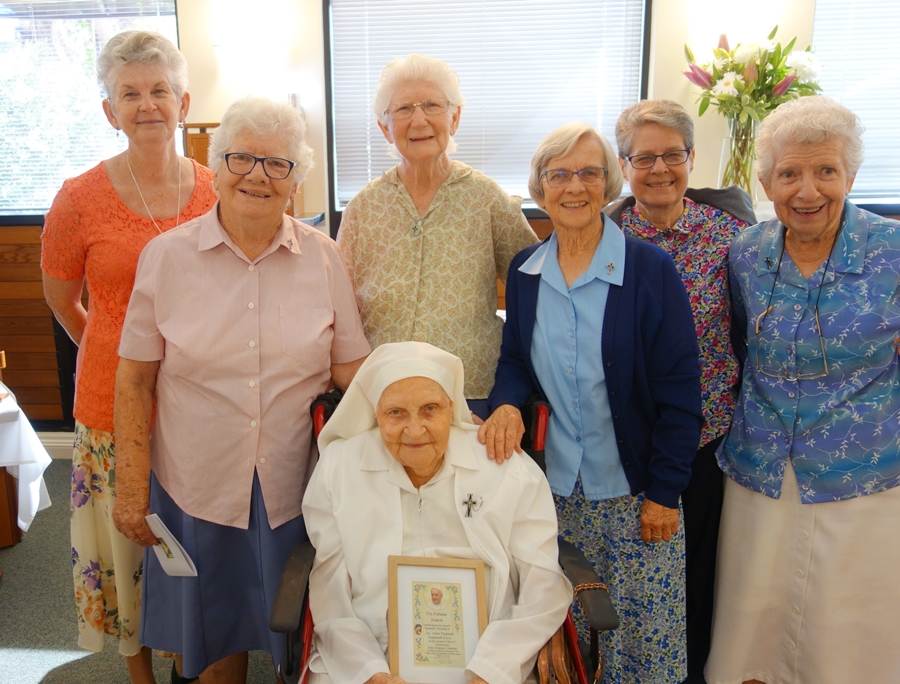